My beautiful cat died yesterday and I feel very sad. He took a keen interest in my knitting, and could usually be found muscling in on a photo shoot. Here he is helping me model some socks ..... 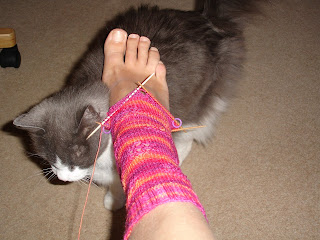 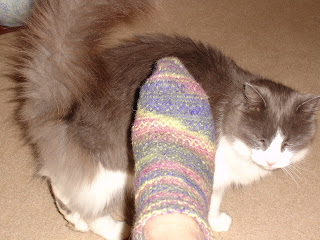 He gave Mr Josiekitten's Christmas presents the paws up too ........ 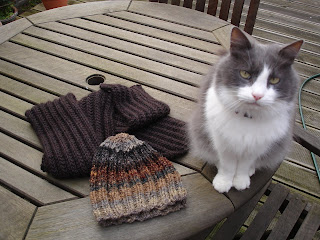 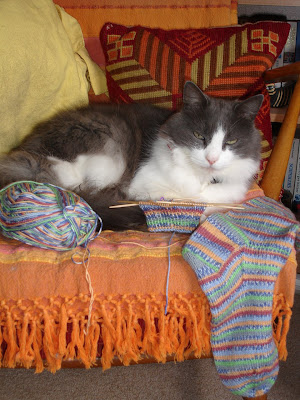 He was Mr November in the 2005 Simply Cats calendar. 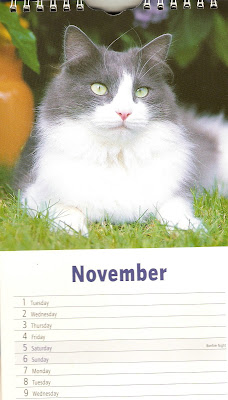 He was the best grey and white fluffy pussycat in the world ever, and we will all miss him.

Stash enhancement of a sort!

As regular readers will know, I am on a stashbust at the moment, and am not 'allowed' to buy yarn, in an attempt to reduce my quite sizeable stash! I've decided to put £1 (or an IOU!) into a pot for each ball of yarn knitted, to save for I Knit and/or Ally Pally later in the year. I had a rummage through said stash, and retrieved a number of odd balls left over from various projects..........2 balls of Louisa Harding Jasmine, a ball of Mirasol Sulka and the 4 balls of Noro Silk Garden from my frogged stripy scarf. I already had a ball of each in my stash for my Lizard Ridge blanket project, so kept the part knitted balls and returned the unknitted ones to my LYS. I had about £40 of yarn returned, and yes, I know that I could have added that money to my pot, but seeing all the yarn just calling out to me, I exchanged it for the following........
2 balls of Colinette Tao in the colourway Venezia. It's 100% silk and feels absolutely luxurious. I have had my beady eyes on it ever since I first stroked some last year. 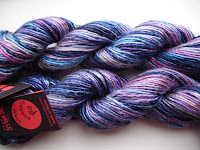 1 skein of Colinette Parisienne in the colourway Velvet Damson. It's 70% kid mohair and 30% polyamide, and is beautifully soft. 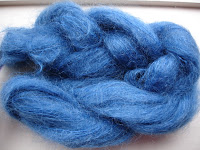 The two yarns will be knitted together to make this scarf. I'm going to make the scarf half the suggested width, otherwies it would be VERY expensive! Here's how they look side by side..... 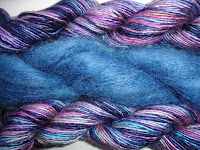 I also bought a skein of Colinette Jitterbug in the colourway October Afternoon. It's a yummy mix of reds, oranges and greens. I loved Snoopydog's yarn in this colourway, so while she has a jumper, I will have matching socks!! 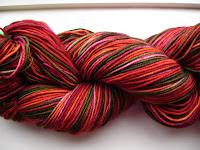 After the exchange of yarns was complete, I had to pay the grand sum of 15p!! Nothing for the Yarn Police to get too worked up about I don't think!!

I won a prize!! I must have entered one of the free giveaways on the Let's Knit website, and had an email from them just before Christmas, telling me I'd won a prize! My prize arrived this week - 3 buttons from the Button Company, made from coconut. I particularly like the two floral ones. I have squirreled them away for later use!

I've finished the first of my Lunchtime socks this week, and have cast on the 2nd one straight away - no SSS for me! It's my usual, plain sock pattern, but I don't think that the yarn needs anything else. Beautiful, rainbow colours. Look............ 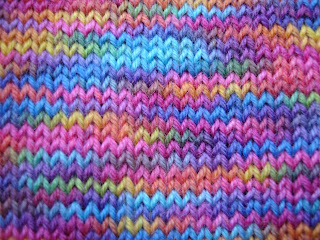 Besides which, I didn't want a complicated pattern to have to concentrate on at school. Here is sock number one. 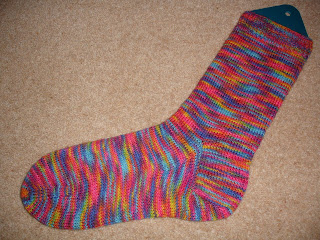 I've also started work on my Salsa cardigan again. It's a free pattern on the Artesano Alpaca website. I'm using Mirasol Miski in a gorgeous shade of blue, as I didn't fancy knitting with the yarn doubled, as suggested in the pattern. I could foresee lots of dropped stitches and much cursing doing it that way! I cast on the back way back in the summer, and had got as far as the armholes. But when I picked it up, I spotted that I'd made a mistake setting up the pattern rows, and even though it wasn't particulary obvious, I knew it was wrong, so had to frog it back to the rib! But it's gone well this week, and the back is now finished, and one front just started. The yarn is absolutely lovely to work with, so soft and buttery. I'm going to try to finish it in the next 4 weeks, as Mr Josiekitten and I are off to Krakow, in Poland, for a long weekend at the start of half term, and I think it would make a very useful addition to my wardrobe, in potentially quite chilly conditions! This is how the back looks..... 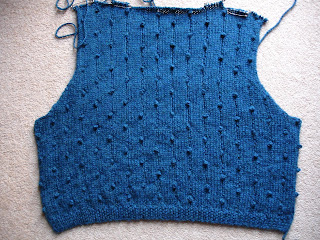 I'm toying with the idea of making the sleeves three-quarter length rather than full length, as per the pattern. I'll make that decision when I get to that point. Let me know what you think!

Well, we're only just into the second week of 2009, and I have finished my January 'Monkey' socks! I found it a really easy pattern to remember, and they have flown off the needles! I'm tempted to cast on for another pair, maybe in a plainer yarn, to really show this wonderful pattern off. Anyway, here they are, in all their glory.... 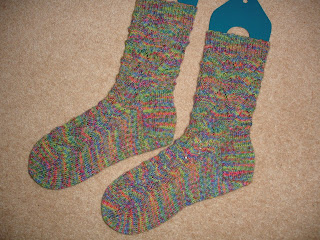 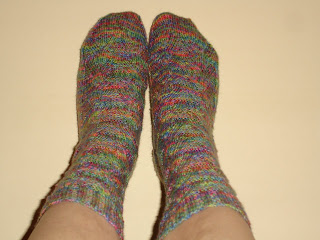 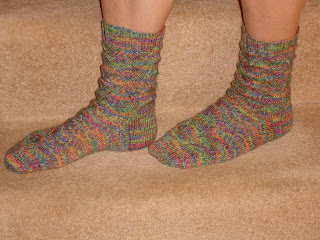 I've got a couple of other projects on the go at the moment. The first is what I've called my 'Lunch time' socks.They are totally plain (the usual Violet Green pattern), so are perfect for picking up to knit a couple of rounds at school during breaks. I'm using a Regia yarn, in bright rainbow colours. 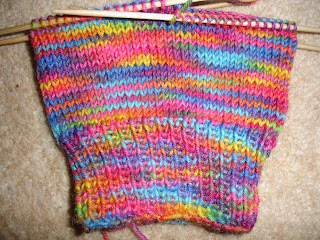 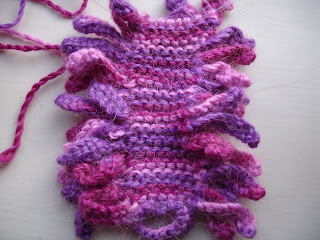 It's a garter stitch 'Twistie' scarf, and the pattern said 'super for trendy pub knitting'!! I thought it might be something fun for my first time at knitting group this week. It was a great evening, and good to spend time with other people who share my interest in all things woolly!

I have frogged my Noro stripy scarf, with some reluctance. It was really hard to admit that I didn't like the way the colours looked against each other. In their separate balls, they were truly gorgeous. But in the alternating stripes, the scarf appeared drab and dull, and so un-Noro-like, that I knew I'd never wear it. So I am on the lookout for a new colour combination.

My stashbusting is going well so far, and I am enjoying using up some of the beautiful yarns I have in my stash. I'm putting £1 into a pot for each ball of yarn knitted, and will use that to buy yarn at I Knit and/or Ally Pally later in the year. Mr Josiekitten and I are off for a day in London at the end of the month, and I had planned a visit to I Knit, telling Mr JK that there was a licensed bar there to keep him happy while I browsed. But that's now off the agenda, as I don't want to be tempted!

I'm officially two days into my 2009 Sock Challenge, and I've just finished my first sock! (I have to confess that I started it on December 27th, but I'm allowing myself that head start!) I'm using a modified version of Cookie's Monkey pattern that I found on Ravelry. It casts on 72 stitches rather than 64 as per the pattern. My previous attempt at Monkey was disastrous, as the sock was too tight to fit over my size 9 foot! I love the pattern and am delighted to report that this sock fits perfectly! Here it is on my birthday sock blocker, in all its glory! 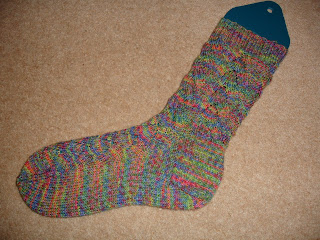 The yarn is lovely too - Regia Mosaik Color that I bought on holiday in Canada last summer. I'm just off to cast on the 2nd one to get it on the needles before I go back to school on Monday.
Posted by josiekitten at 21:27 1 comment: