Lazing on a Sunday afternoon

It's been a strange weekend weather-wise here on the North Norfolk coast. Sea mists have been swirling in for much of the time. But it brightened up on Sunday afternoon and the sun shone, so I took the opportunity to take a few photos of some of the flowers. Most of the garden is devoted to Mr Josiekitten's veggie patch, but there are a couple of beds for flowers, and loads of pots too! 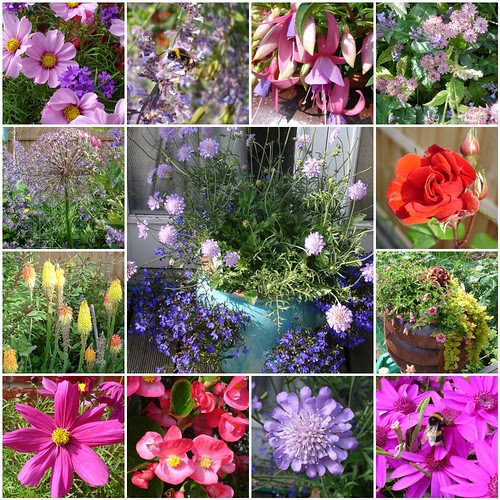 The catmint was quivering with bees, and Henrycat went to investigate. He sniffed it, he munched it, he squished it, he sat on it! He was in pussycat heaven!

It was all a bit much for him, and he spent the rest of the afternoon stretched out on the decking with a smile on his face! 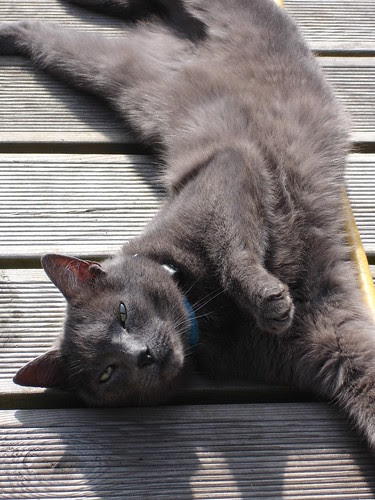 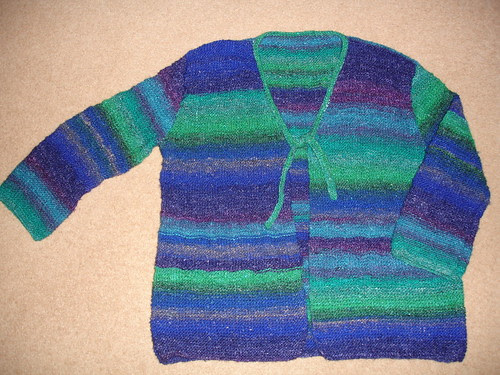 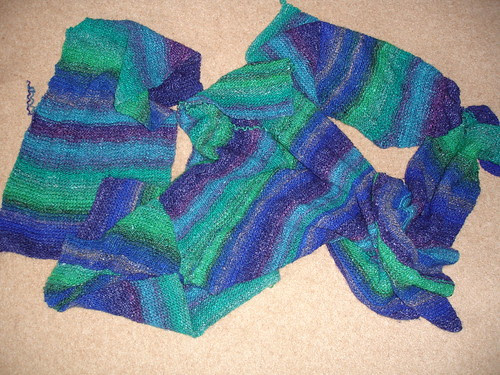 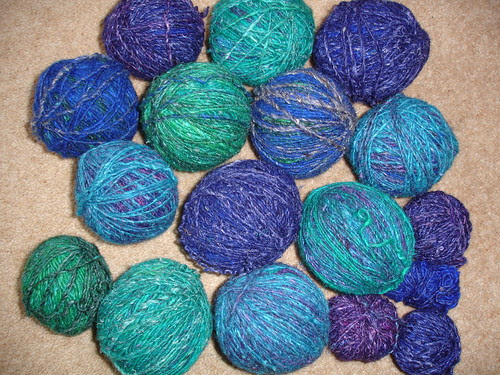 I've finally frogged my Silk Garden cardigan. It was the first big thing I made when I started knitting again, but has hardly been worn. It was way too big and looked pretty awful. I need to stop always going for the biggest size now that I've lost weight! I love the colours in this, so it seemed crazy to just have it sitting there. After all, Silk garden isn't exactly cheap! It's ready and waiting to be reknitted. I have a couple of different patterns in mind, having scoured Ravelry for a few weeks. I'll let you know which one I choose.

I've got 2 pairs of socks on the go too! These are extra to my Sock Challenge pairs. The first is using my Zauberball. I've been desperate to start knitting this, but have been trying to find a pattern to show off the beauty of the yarn, without detracting from it. I've finally settled on RPM, from Knitty Summer 2006. It's knitting up pretty well, and I'm almost at the heel. The pattern leaves it for the knitter to decide on the heel and toe used. I really should have another go at my short rows. Decisions, decisions! This is what it looks like so far.......... 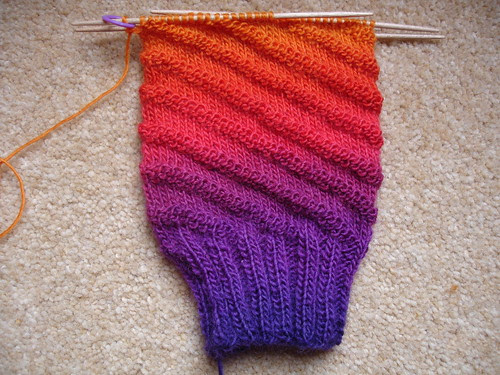 The photo doesn't really do justice to the vividness of the colours. This colourway is Fuchsienbeet, and it just glows!

My second pair of socks is my usual Violet Green sock generator pattern, for a good friend in Germany. I've already made Andrea a pair of Monkey socks, and these are for her husband, Wolfgang. We'll be staying with them during the summer when we are travelling round Germany. I'm using a Regia yarn, one of the Kaffe Fassett stripy ones. I hope he will like them! They haven't progressed very far, as I only pick them up in odd minutes at work, during the lunchtime. 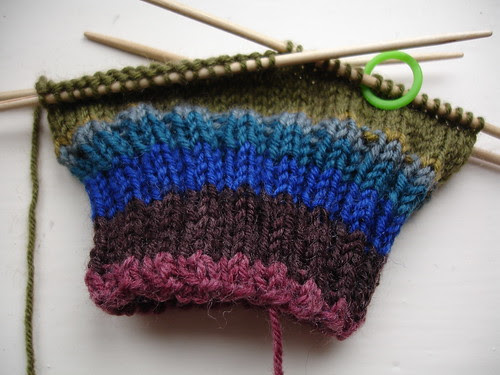 Nearly the end of June, and time to think about my July Sock Challenge socks. The yarn lined up is Lorna's Laces Shepherd Sock Multi in Desert Flower. Mr Josiekitten gave it to me for Valentine's day 2008! I've narrowed my pattern choice down to one of three. You'll just have to call back soon to see which I choose!

This is just a quick post to celebrate the completion of my Salsa cardigan! I am ashamed to admit that I started knitting this last August. I went in fits and starts with it, and got sidetracked with sock knitting, and .......................well, I can't think of any more excuses really. Suffice it to say that it really shouldn't have taken 10 months to knit! When I concentrated on it, it did get done very quickly. The pattern is available free from the Artesano website - you can find it here. I chose not to knit it using the recommended yarn (Artesano Alpaca) as it had to be knitted with the yarn doubled. So I subbed it for Mirasol Miski, 100% baby llama. It's a goregous yarn - really soft and buttery, and is going to keep me very snug this autumn. 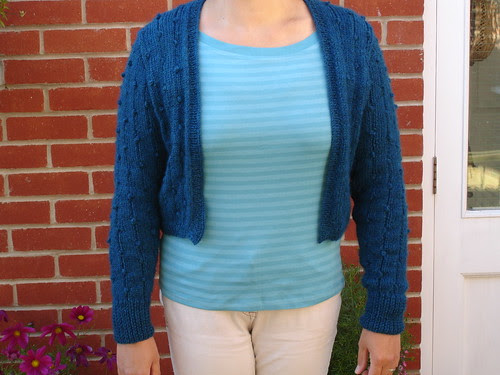 Now that I've finished this project, I've allowed myself to start a couple of pairs of socks - one using my Zauberball. I'll hopefully have something to show you next time.

Whittling down the WIP's.

I'm brain dead this evening! I've been sat in front of the computer all day writing school reports. It's my own fault. I've had them on the 'to do' list for several weeks, and the deadline is looming! They are almost done now, so I'm giving myself the evening off! Mr Josiekitten had bought me some clotted cream fudge to celebrate finishing them, but I stumbled across his hiding place! Yum yum! I haven't eaten it all - plenty left for tomorrow!
I've finished my June Sock Challenge socks in record time! I made Daydreamer socks, designed by Vikki Harding. It was a lovely pattern to knit - mindless enough to watch TV whilst knitting, but plenty to keep you interested. And they seemed to grow very quickly. I'm sure that short row heel socks get done quicker than heel flap socks. The pattern is very stretchy and fits my big feet without any problems! 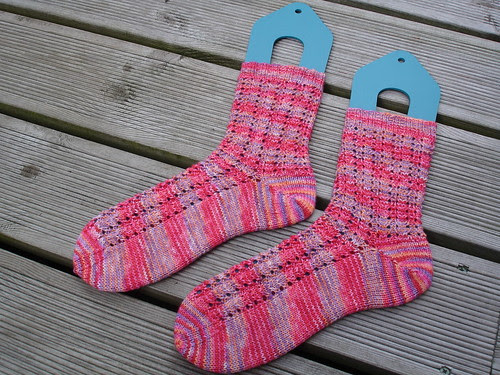 I used a skein of Vikki's yarn too - visit her Etsy shop if you like what you see. This was a skein of Bambino, a mix of bamboo and merino, in the colourway Fresh Berries. It's incredibly soft, so is perfect for socks.

I've also finished Marylin, a scarf that I've made for my sister-in-law. I like the lace pattern, but am a bit disappointed that despite rather vigorous blocking, the edges curl in. Someone suggested doing a single crochet all the way round the edge to hold it. I may well give it a go, as I've got a few weeks before I shall be seeing her. 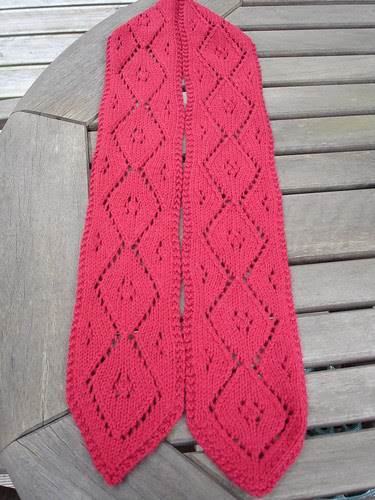 I've currently only got 2 WIPs on the needles - my Salsa cardigan and pink wormy scarf. I'm trying desperately not to start anything else until the cardigan is done! Even though my Zauberball is calling to me very loudly, I shall try to resist! And I weakened in my Stashbusting efforts this week too. This little lot arrived........................ 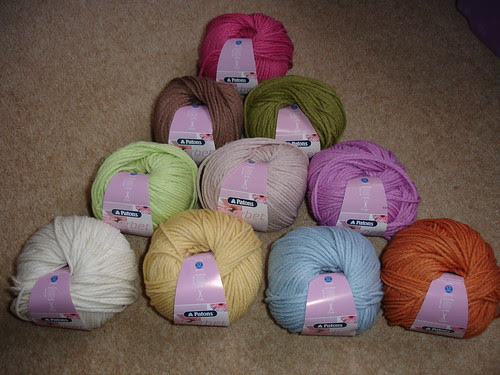 10 balls of Patons Sorbet to make this beautiful crochet bag. This will make the perfect project to start off the summer holidays. Most of the yarn was only 79p a ball from Kemps. Their service was brilliant, so I'm sure that I will be visiting again!

Well, can't sit around here chatting - I've got a cardigan to finish! Byeeeeeeeeee!

I've discovered some new yarn, and feel it my knitterly duty to tell you all about it! Just call me your friendly enabler! I was on the search for a birthday present for a good knitting pal (can't say any more than that as no doubt she'll be reading this!), and I came across Laughing Yaffle. The sock yarns are beautiful, and in a choice of dark, bright, light and same shades. You'll be spolit for choice! I ended up with a skein of Watermelon, beautifully packaged with accompanying sequins! 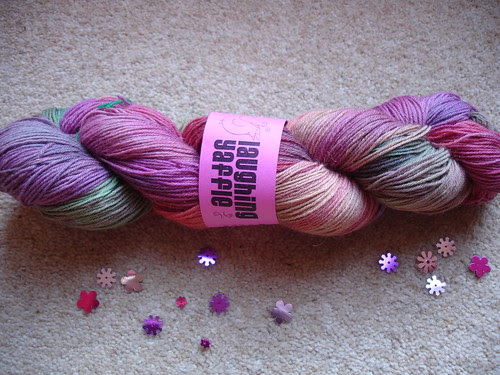 Alison's customer service is second to none - speedy delivery, and friendly communication too! As well as yarn, Alison makes gorgeous sock project bags and needle cases, and sells a whole range of other knitting goodies. So what are you waiting for? Get over there now, and take a look!

Mr Josiekitten and I went to Pensthorpe yesterday. It's where the BBC are currently filming their Springwatch programmes, and is a stone's throw away from where we live on the North Norfolk coast. They were holding a Gardening, Craft and Food Fair, and since Mr Josiekitten is a keen gardener, I have the crafts covered and we both like eating, it seemed to tick all the boxes! It was a great day out. Pensthorpe is a really beautiful place, and we both came away agreeing that we need to visit more often. 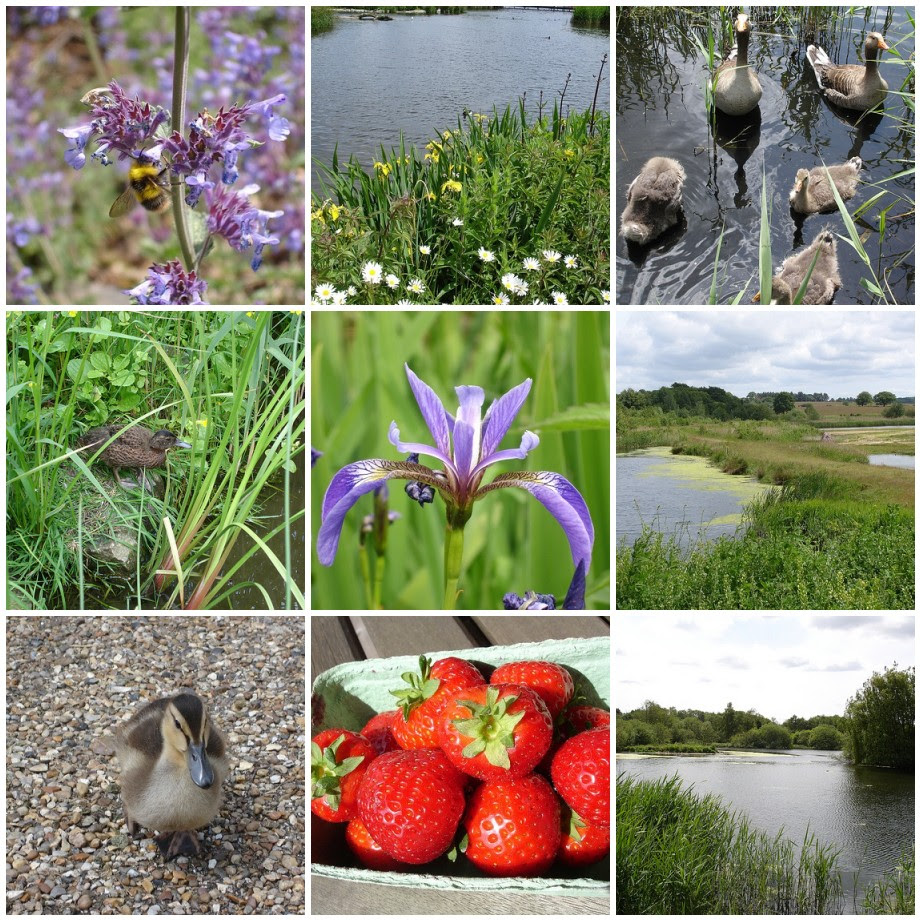 Whilst there, I snuck around the back to take another look at the sheep, only to come across BBC's very own Chris Packham being given a private mini-tour! He was introduced to Nobby the Norfolk Horn, Belinda the Bluefaced Leicester, Susie the Southdown and Dougal the Scottish Blackface amongst others.

My June sock is progressing now after a couple of false starts. I usually cast on 68 stitches for a plain sock, and this pattern uses 60 with a 6 stitch pattern repeat. So I tried 72 stitches first - way too big. So then I tried 66 - still too big, plus the yarn pooled terribly. So I'm sticking with the number of stitches as per the pattern, and it seems ok. Take a look .... 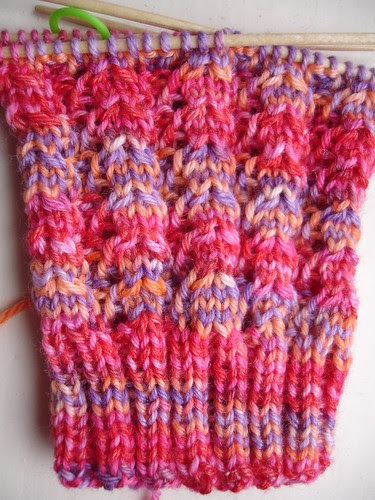 I wasn't allowed to get much knitting done last night, as you can see! Henrycat decided that his needs were far greater, and just wouldn't take no for an answer! Hopefully I'll get on better today! 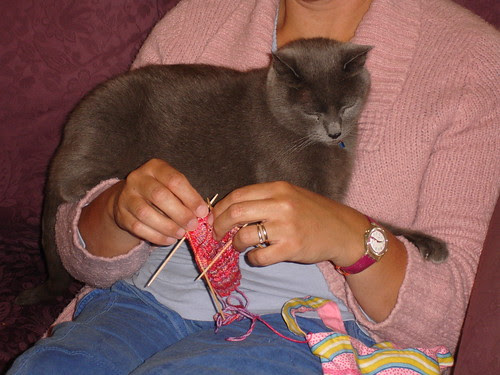 Whilst on holiday, Mr Josiekitten and I made friends with some of the local cats. Various cat families live in the area around the harbour, amongst the rocks and dried seaweed, and rely mainly on the tourists (and occasionally the fishermen) for their food. We went prepared with a couple of boxes of biscuits - one specially for kittens - and gave them lunch and supper each day. There was one family in particular that we adopted for the week - mum and three gorgeous kittens. 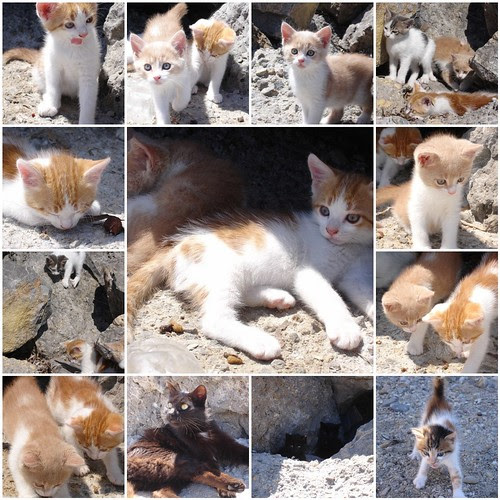 The black cat on the bottom row always came for a fuss and some food. But it wasn't until almost the end of the week that we realised that she also had kittens. You can just seem them peeping out from the rocks in the next photo. And as for the little chap in the bottom right picture, we heard some plaintive meowing one day, went to investigate, and found this tiny little kitten. He was desperately calling out for his mother, but she was nowhere to be seen. He was very brave and came right up to us, but was too young to eat solids. We didn't see him again during the holiday, and I suspect that he didn't survive. It's really heartbreaking, but we knew that there was nothing we could do for him. I hope his mum turned up.

The flowers were particularly beautiful this year - the island had a lot of rain over the winter, and this seems to have made things very lush. 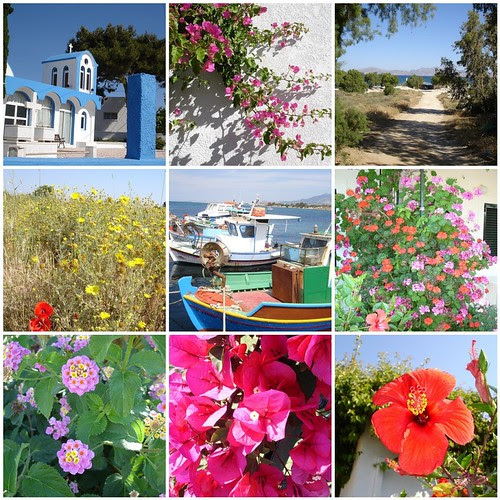 Back on the knitting front, here are a couple of photos of my Ishbel shawl. It's my first serious lace project, and after a few hiccups at the start, I really enjoyed knitting it.

I don't think I told you about the swap I took part in recently on Phoenix Knitting Forums. I've been wondering what to do with all the ends of sock yarn balls, and decided that I'd like to start a sock yarn blanket, having admired Shelley's. A swap was started to exchange mini-skeins of sock yarn. Each mini-skein weighs about 6g and should be enough to make two mitred squares. These are the skeins that I received from Tatty..... 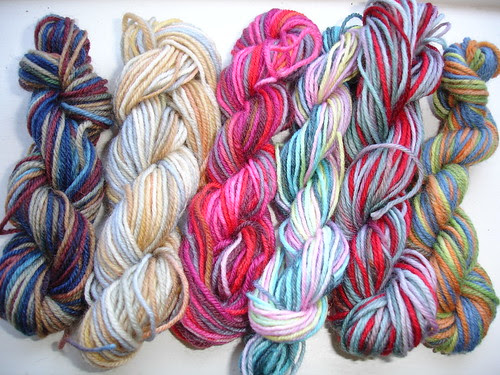 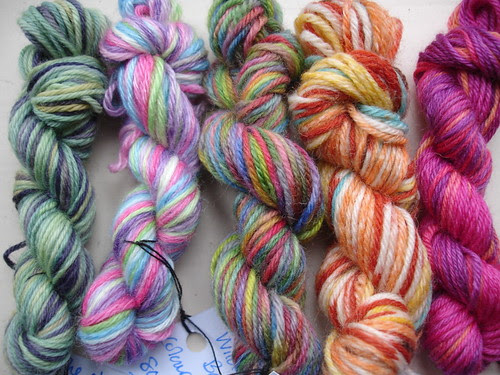 It was fun sorting out a nice mixture of yarns and colours. Now I need to get cracking on the blanket! I think that it is going to be a long-term project. I'll keep you updated!

And finally, my June Sock Challenge socks can now be unveiled! Drum roll please! I've gone for Daydreamer socks by Vikki Harding, and am using some of Vikki's beautiful yarn from Wild Fire Fibres to make them. I have a skein of Fresh Berries merino wool just calling out to be knitted! 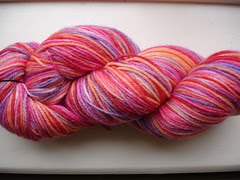 Isn't it delicious?! Call back soon to see how they're progressing!