Did you ever play the game 'I went to market' when you were little? You know the one, where you have to add an item to the list (often alphabetically), whilst at the same time remembering everything that proceeded it. Well, this is the knitter's version!
I packed my knitting bag for my holiday and in it I put:- 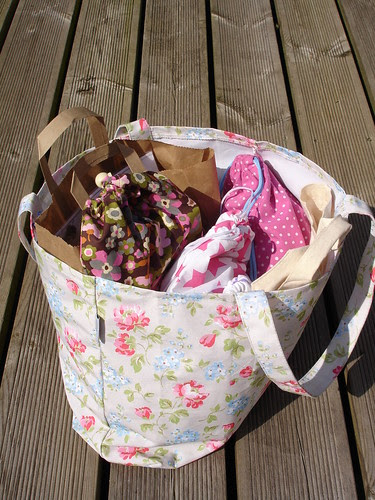 I don't think that my knitting bag bulges too much so as to provoke a comment from Mr Josiekitten! I do like to have some choice, and ........................what if I were to run out?! We are off to Germany for two weeks, staying with family and friends. I need lots of knitting projects to take my mind off the fact that we're driving on the wrong side of the road!

While I am away, my blog will be celebrating its first birthday! On August 26th, The Woolly Adventures of a Knitting Kitty reaches the grand old age of 1! When I started blogging, I didn't imagine for one minute the pleasure that it would give me. So as a little thank you to you, the readers, I'm holding a little birthday giveaway! Anyone who leaves me a message on this post will be entered into a draw to win two delicious skeins of yarn from my stash. It's hand dyed 100% British 4 ply wool from Angels and Elephants, in the colourway Candyfloss. Take a look..... 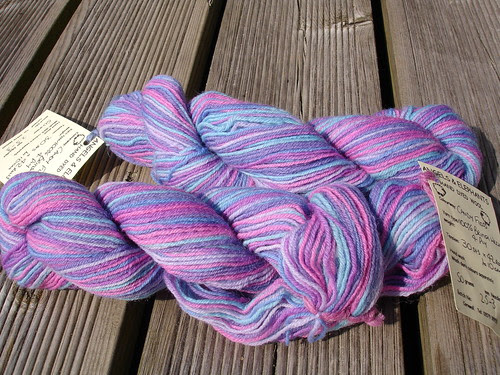 I'll use a random number generator to pick the winner on August 31st, so you have between now and then to leave me a comment. I'm happy to post world-wide, as I know that I have lots of visitors from overseas. So what are you waiting for?! Anyway, I must away, as I need to get my knitting bag into the car before Mr Josiekitten gets home! Auf Wiedersehen!

K is for Knit!

Take a large bag of brightly coloured acrylic yarn, some child-friendly knitting needles and a couple of books. Put them together and what do you have? The beginnings of a school knitting club! 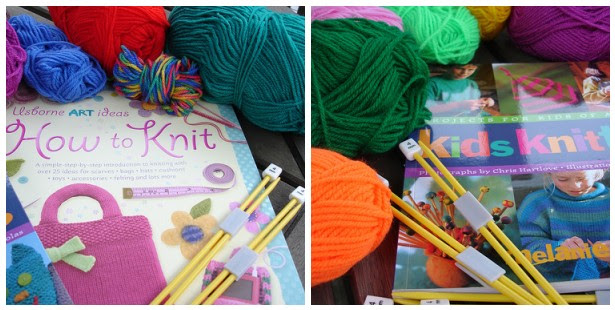 I'm hoping to inspire some of the children in my school to become the next generation of knitters. So I've been busy making things to show the kids and get them all fired up with enthusiasm! I joined the 'K is for Knit' group on Ravelry and they have been very helpful with ideas. These are the projects I've come up with so far....... 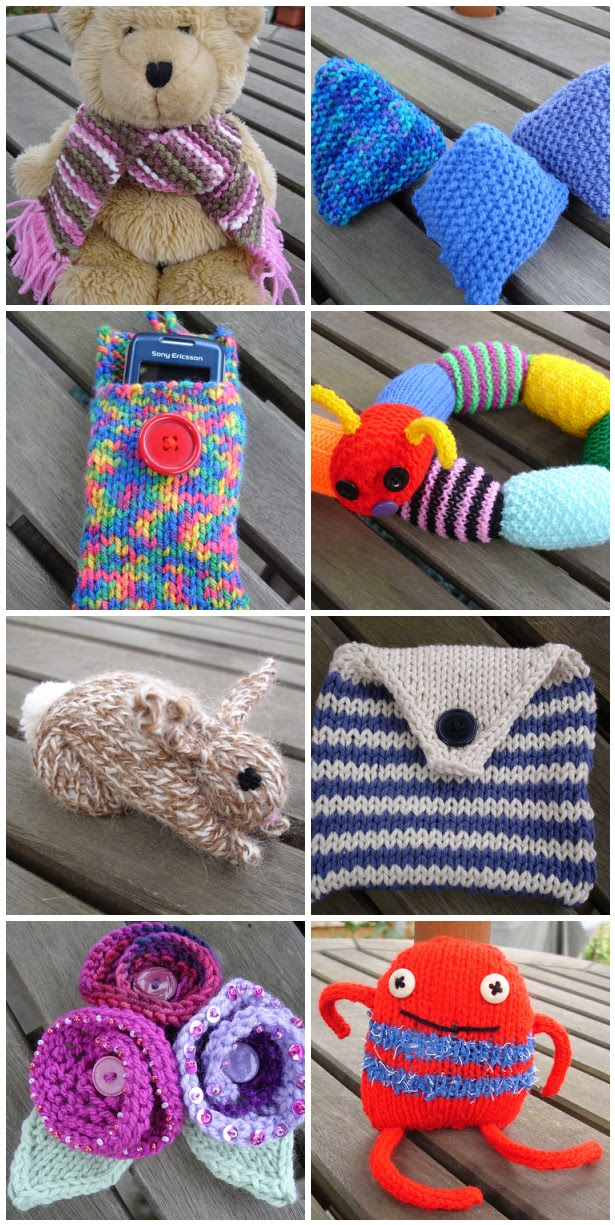 I thought a garter stitch scarf for a teddy would make a good start, or a set of garter stitch juggling balls. Other ideas are a case for a mobile phone or iPod, a cuddly caterpillar, a rabbit (believe it or not, this started off as a square of knitting. Find out how by looking here!), a purse, some flowers and a little monster toy. I'm planning on starting off with a small number of children (unless I can press-gang anyone else to lend a hand), and having projects cast on already. As each group of children becomes more proficient, then more will be able to join, and I will (hopefully!) be able to use the children to show the next group what to do. That's the plan anyway! I will report back once the club is up and running. In the meantime, if you have any simple patterns you can recommend, then please leave me a message. Thanks!

Hello there, Henrycat here. I'm taking this opportunity to have a little chat with you because my Mum is a bit busy at the moment. She set herself this mammoth holiday knitting list, and just between you and me, I think that she's bitten off a bit more than she can chew! At the moment, she's making samples of lots of easy projects to start off her school knitting club next term. I snuck upstairs to take a peep, and found the bed covered in balls of wool. Pussycat heaven! A lovely, super-squishy place to sleep. OK, so it may have been acrylic, and I prefer alpaca and cashmere, but a pussycat can't have the best all of the time. It made a comfy pillow regardless. I settled down for a snooze, as you can see. 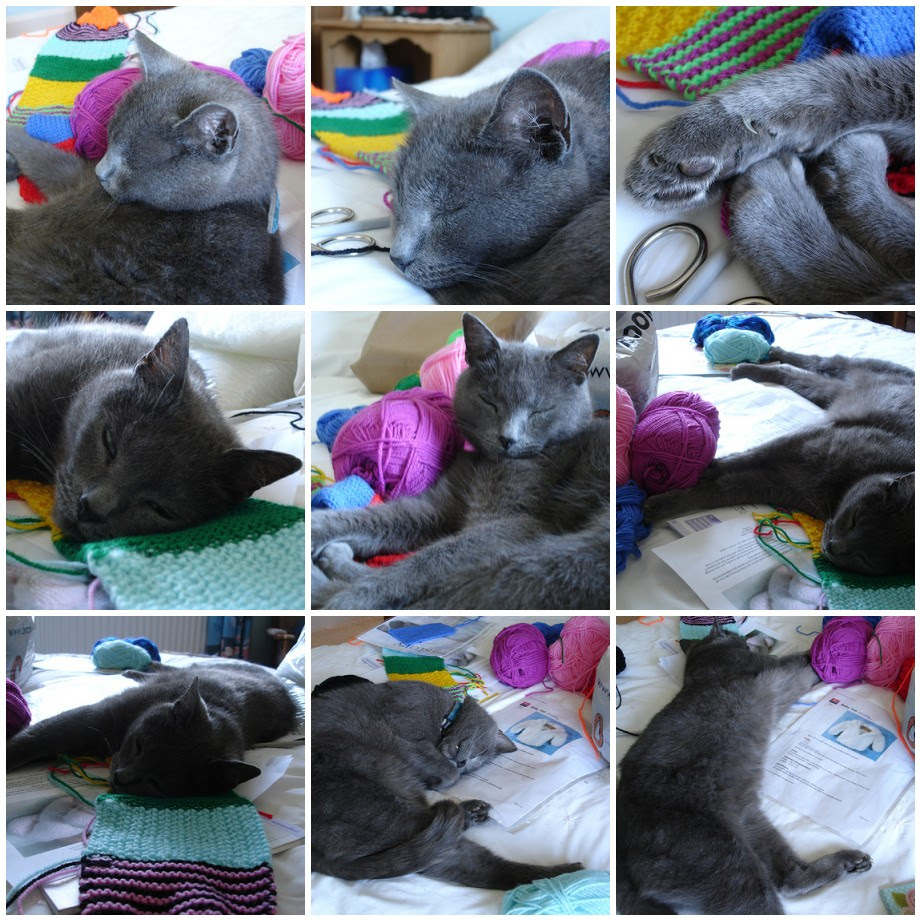 I'll get her to post some pictures of what she's been making some time soon. I think that I might put in a request for a cat blankie, now that I'm a gentleman of more mature years. (Snoopydog came to help me celebrate my 14th birthday last week.)

I must just tell you how proud I am of my Mum. She entered a couple of classes in our local horticultural show. Just look at how she did! My Dad (Mr Josiekitten) got a 1st for his spuds again, and a 2nd place for his beetroot! I'm letting him bask in the glory, but I will just tell you that it's all down to me - I made sure that I kept that potato plot nicely fertilised!

Well, I'd better be off. All this typing has quite worn me out. I'm ready for another snooze. Miaow for now!

Coming over all innocent

Snoopydog came for the day yesterday, armed with yarn and gifts! A jar of her delicious blackcurrant jam, some gooseberry chutney and some chard and kale. Yum! We spent the day knitting little hats for The Big Knit 2009. It's a great way to raise money for the elderly. Snoopydog seemed to go out of her way to choose the most difficult of yarns to knit with - boucle, eyelash - whilst I stuck more or less to good old double knitting. There were one or two mishaps on the way - dropped stitches, inside out i-cords, wrong ends snipped off (check out snoopydog's blog for tips on how to do this! LOL), but by the end of the day, we had a good number of hats to get us underway. Belinda Bear and Betty Bear helped with the hat modelling!

We're aiming to have another day together to make some more. I don't think they need to be sent in until sometime in October, so there's still plenty of time!

Can't stop here any longer, as I have a zillion and one things to do. Entries for our local show need to be in tomorrow, so I'm going to enter a few bits and pieces. Hopefully I'll do better than last year! I shall report back at the weekend!

I'm suffering this week - in fact, for the last couple of weeks - from a very bad bout of Sock Avoidance Syndrome! (S.A.S.) I have failed to complete my July Sock Challenge socks! Each pattern I've tried knitting with the beautiful Lorna's Laces yarn just hasn't looked right. And then, when I thought I'd found the perfect pattern - Fantastic Ribbed Socks - they have knitted up too big (and pooled terribly on the foot!) So I am ignoring them for the moment, and have been busy getting on with other projects.
I finished my Lizzy cardigan and am fairly pleased with it. I love the ruffles on the cuffs and front edges, but don't like the way the bottom rolls up. I also wish that I was better at sewing things up. I've decided that I don't much like knitting garments, because I'm never satisfied with the finishing off. I much prefer the instant gratification of a sock or scarf! Anyway, here is my 2nd time lucky Lizzy cardigan..... 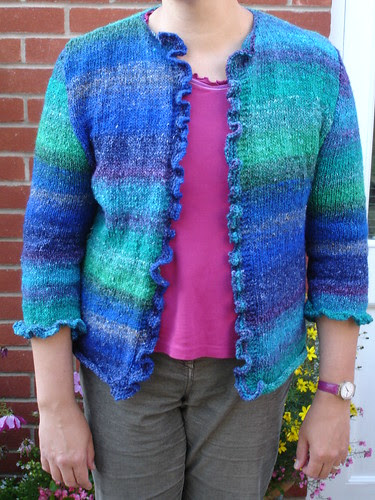 You can see what I mean about the bottom edges curling up. I'm tempted to add a ruffle around the bottom, but am worried that it might be a frilly overdose! I think that I will wear it a bit and see how it goes. It is definitely going to get more wear this time round anyway.

I've just made a couple of felted piggies for the pub that we go knitting in each week. The pub is called The Pigs, and it is crammed full of pig memorabilia. Sounds a bit tacky, but it isn't, at all. The porky pair can sit alongside our sign 'Pigs in Knits'! I used an odd ball of Noro Kureyon left over from my Booga bag, and just managed to squeeze 2 pigs out of it. The pattern was a freebie from here. The pigs were stuffed and then felted, and even though they have been in the washing machine three times now, they aren't felted as much as I'd hoped. But they still look very cute, so I'm leaving them as they are. Oink Oink! 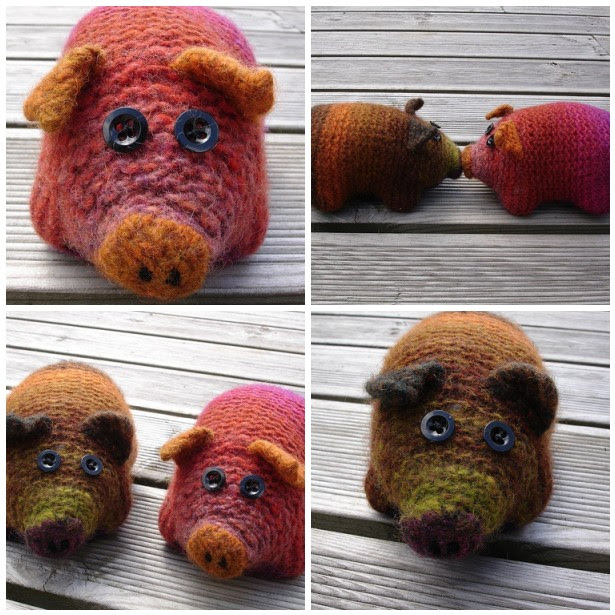 I made a pair of Fetchings on Saturday, whilst watching a fabulous BBC Proms concert on TV. It was celebrating 75 years of Classic MGM Film Musicals, and it was absolutely fantastic. It's been several years since I went to the Proms (with my good friend snoopydog), but at the end of the evening, Mr Josiekitten and I decided that we may well try to go next year. I used one ball of Debbie Bliss Cashmerino Aran, and just managed to get a pair out of it! They are for a friend, Brigitte, who is a farmer in Brittany, France. I thought they might keep her hands warm next winter. I have another ball in the same colourway, so may try to make a neck warmer to match. 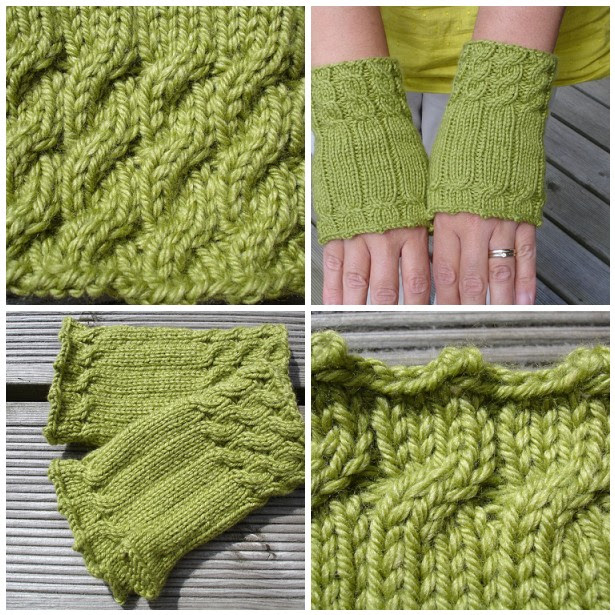 I love the picot cast off edging. The yarn really does feel very luxurious and velvety. I want a pair for myself now! (just a bit bigger!)

I dug out of hibernation my KittyCat, started way back in April. (Can you see how serious my S.A.S. is?!) I was making it for baby Ida, but found it very fiddly, and was worried that my sewing skills weren't up to the grasp of a baby! I had visions of an ear or a paw coming loose. Anyway, I persisted with it, and here she is! Meet KittyCat. 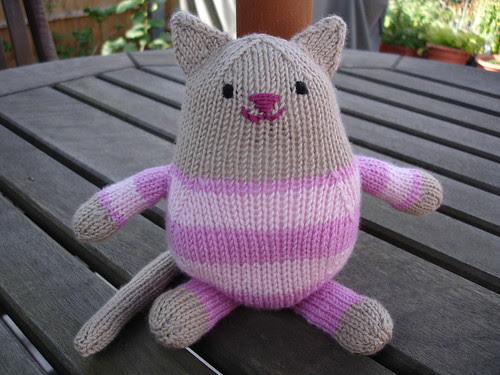 Here she is from the back - I added a tail to the pattern! 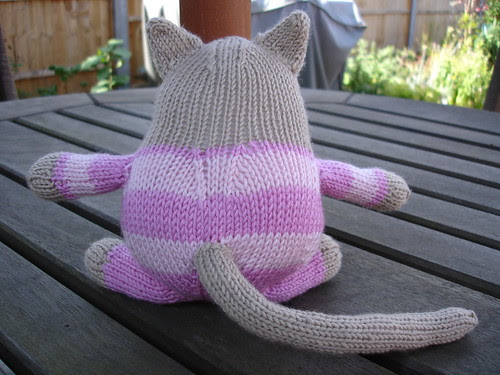 And here she is saying 'good morning' to Henrycat. He wasn't very impressed at having his sleep disturbed to meet his new friend! 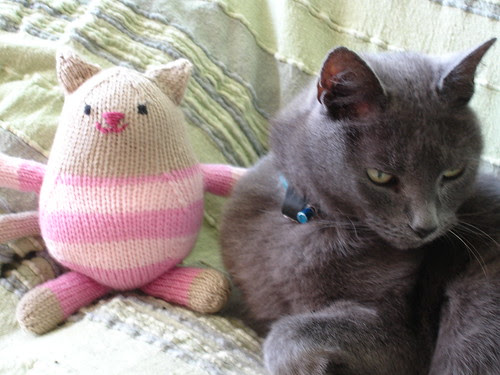 Well, I think you're up to date now. Snoopydog is coming to play tomorrow, so call back soon to see what we've been getting up to! Bye for now.