I finally finished Michael's summery stripy socks. After they'd been washed, they fluffed up a bit, and the yarn felt a little better. But I don't think that I'll be buying any more of that yarn, even though I love the colours. I hope he likes them.

I've started two more pairs of socks. The first is another plain pair for Mr Josiekitten's cousin, using Opal Circus yarn. I can't believe how quickly they are knitting up. I started on Saturday evening, when we were at a concert given by Chris Newman and Maire Ni Chathasaigh, a fabulous guitar and Irish harp duo. By the end of the concert, I'd almost reached the heel flap! This is what they look like so far......

I've also started scarf for Mr Josiekitten's half-sister. We are going to stay with her over the summer when we are travelling round Germany. It's from issue 13 of Yarn Forward, and I'm using 2 balls of Debbie Bliss Cashmerino Aran. I like the pattern, although I am concerned that the edges will curl.

My Ishbel is also coming along nicely - I'm on the 3rd lace chart now, and it's taking me about 15 minutes just to knit one row!

Finally, I've chosen my pattern for the May Sock Challenge socks - Nutkin. Partly chosen because there is a KAL just starting on Phoenix Knitting Forums, I've liked this pattern ever since I saw Snoopydog's Nutkin socks. I have changed the yarn I was intending to use for a later month's, because the Koigu I had lined up seems a little short on yardage, so will have to be used for a pair of toe-up socks instead. I'm using a sock yarn that I bought at the I Knit day last September - Madeline Tosh hand-dyed merino in Chatres. I LOVE, LOVE, LOVE the colours - the yarn just seems to glow!

There must be something in the air - or there must have been 9 months ago! Because a lot of people on Phoenix Knitting Forums have been busy knitting baby clothes. My offerings are for baby Ida, new daughter of Jonathan, a colleague. I was asked to make something by my boss, 'as you knit'! So after a quick search on Ravelry, and asking friends for favourite patterns, I came up with these...........

Using Debbie Bliss Baby Cashmerino, I made Saartje's Booties, Sweet Baby Cap and Seamless Yoked Baby Sweater. But what about the toy you were talking about last time, I hear you cry?! RATS!! I've been rumbled! I was making Kate, a cute little cat. But it is sooooooooo fiddly! My sewing skills aren't great, and I'm terrified that an ear or paw is going to get detached from the body, and I'll be repsonsible for choking poor little Ida! So Kitty Kate is still in pieces in a carrier bag, in the naughty corner!! I'll dig her out again sometime, I promise!

I've had a small spending splurge this weekend. Mr Josiekitten and I had tickets to go and see Riverdance down in Ipswich yesterday. We decided to make a day of it, and visit Aldeburgh first. It was then that I had an idea - the Natural Dye Studio is very close to Aldeburgh! Can you guess what happened next?! I contacted Amanda who said that she'd be there dyeing in the morning, so off we went! It was great - baskets full of her delicious skeins of yarn. I succumbed to the following.....

From left to right, the first is a skein of Mirage, in Wisteria. It's a merino/tencel mix, and the tencel gives it a lovely sheen. I think it's destined to become a shawl - maybe another Ishbel (says she, having not even finished the first one yet!) In the middle are a set of 10 mini skeins. I was like a child in a sweet shop, not knowing which colourways to choose. I'm hoping to use these to make a Cassia crochet mobius scarf. And the third skein is Dazzle, in Sweet Pea. This is a sock yarn using wool from the British Blue Faced Leicester sheep. It is so, so soft, and is going to make some lovely socks.

Amanda showed me the dyeing room - it was very interesting to see the natural dyes that she uses. She must work incredibly hard, right through the year, to keep up with the demand. I love the subtle colours that she produces, and will be treating myself to another membership of the Sock Club once my stash is a little smaller! Here's a taster of what I saw....

Then we headed off to Aldeburgh and ate fish and chips on the beach. It was a gloriously sunny day, and I had to make sure that the seagulls didn't pinch any of my lunch!

I managed to get some 'car-knitting' done, on Michael's summery stripy socks, and they should be done in the next few days. I've also finished my April sock challenge pair, and have to say that I am pretty pleased with how they turned out. I used the Circle socks pattern, and it's worked so well with the yarn. Take a look!

I'm desperately trying to finish some baby things before term starts tomorrow. I just have a toy to complete, but it's a bit fiddly. I think I'd better go and get on with it now!

Snoopydog came for lunch today. We had a great time catching up with knitterly news, drinking mugs of tea and eating cheese on toast! Snoops gave me a great gift - a very cute little sheep piggy bank for storing all my £1 coins from stash knitting! Here it is. You can just see the tip of Henry Cat's nose - he was inspecting it!

I shall have to turn my I.O.U. list into real money ready to spend at I Knit this September ready for when Snoopydog and I have our girls' day out! So far I think I have about £25 to spend!!

Not a great deal of knitting was done, although not for the want of trying! Snoopydog was just starting the trimming for her Wendy Happy baby cardigan, and kept getting distracted by chatting! This was the sum total of her afternoon's efforts!

It's a tricky 4 row repeated pattern with lots of knit 2 togethers, yarn forwards and casting off stitches, all done with slippery yarn! More than once, Snoopydog ended up with the wrong number of stitches! But it will look very pretty once it's finished! I worked on my Circle socks and hope to finish them in the next day or so. Call back later to take a look!

It's been a busy Easter. Mr Josiekitten's cousins from Germany stayed with us last week, so it was one big round of entertaining! Luckily, the weather was pretty good, and they managed to get out and about each day, so I was able to have a bit of 'me' time for knitting! I have my April 2009 Sock Challenge socks underway. I'm knitting Circle Socks, using a Regia Design Line Kaffe Fassett yarn. I've added another pattern repeat, and have cast on 72 stitches, decreasing to 68 down the foot, and have also done a ribbed cuff. The yarn works really well with the pattern, and they're looking good!

I'm also knitting another pair of socks for my friend Michele's Dad. He loved the pair I knitted earlier in the year, and asked for another pair in equally bright, but more summery colours! So I found some yarn and have made a start.

It's my usual Violet Green sock generator pattern. The yarn is Schoppel-Wolle Admiral R Druck in colourway Orange Spice. Although I love the colour of the yarn, it's not quite as thick as the Regia and Opal yarns I've used in the past, and the sock just feels a bit 'thin'. I guess it will be ok for the summer!

I've been busy making some baby clothes, and have one more thing to finish, so will show you what I've been making next time. My aim is to try and finish most of my current WIPs this holiday, ready to start afresh for the new term. In the meantime, here are some photos of some of the flowers currently in bloom chez Josiekitten.

This cartoon appeared in our local paper this week. Mr Josiekitten spotted it, and, chuckling to himself, passed the paper over to me. I just had to share it with you! Enjoy!

I've just taken part in a dishcloth swap on Phoenix Knitting Forums - it's the first swap we've had since the new forum was set up. I've sent a parcel off across the pond to Jinann, and today I received my parcel from Leah. It was great fun to do, and very interesting to see how inventive people have been. I got a lovely stripy dishcloth, a cute knitted bunny and some yummy chocolate eggs. Mmmmmmmmmm - I've been well and truly spoilt! Thanks so much! 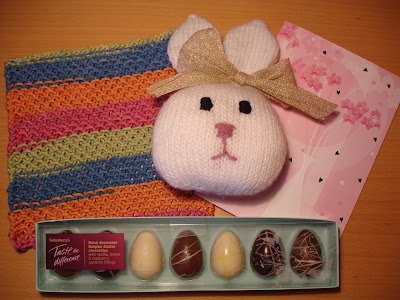