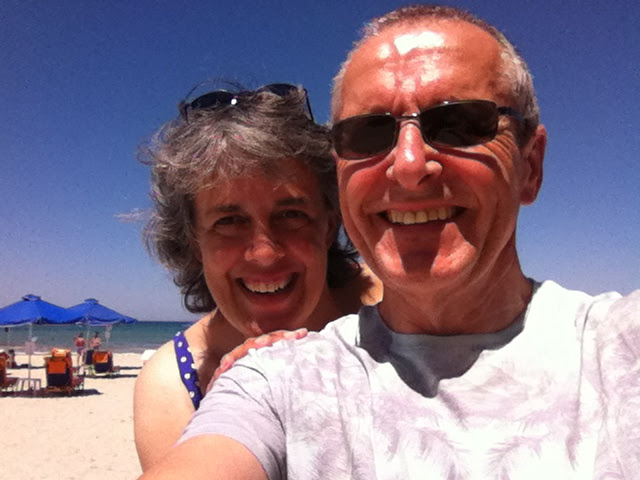 Ally Pally and beyond

I've been looking forward to this weekend for a while now as the Knitting and Stitching Show (possibly better known as Ally Pally) has been in my diary for some months. I set off early yesterday to go on an organised bus trip. I like it because it's pretty much door to door service. I can knit on the bus and not worry about either driving into London or getting across London on the trains. Perfect!

Although busy, I have seen it much crazier than yesterday. Perhaps now that the show is on for 5 days, the footfall is more spread out. I dropped off a load of yarn to the UK Hand Knitting Association who were collecting it for the charity Knit for Peace and had a chat with Juliet Bernard who was sporting a white coat and 'Yarn Doctor' name badge! Juliet co-ordinates all the Stylecraft Blogstars activities. I then did my usual 'up and down' the aisles, looking for anything of interest. I didn't go with a specific shopping list, but still came home with some rather nice treats. Three books - the latest Rowan book, a delightful Fair isle book (the 'easy' in the title sold it to me, as well as admiring all the samples there!) and a book of sock patterns which I had admired at Fibre-East back in the summer. Martin Storey was on the Rowan stand and very kindly signed my book for me. I felt a little bad interrupting his lunch but he didn't seem to mind! Three fat quarters of fabric called out to me - two kitty ones and one Christmas one. I also bought some sock yarn - 2 skeins of Socks Yeah! from Rachel Coopey. She has just brought out some new colours in the range and I loved the green. Debonnaire Yarns is another favourite and I couldn't resist a skein of sparkly speckled yarn. Finally a skein of sock yarn from Truly Hooked. The yarn is dyed by the same person who wrote the Sock Drawer book and she had a special deal on! I'm not one to miss out on a bargain!! When I'd finished my shopping and browsing, I went onto the Stylecraft stand to lend a hand there for an hour. It was so busy, I spent most of my time restocking the little cubbies with yarn. I also chatted with people about the new sock yarn, Head over Heels. It was fun to be a part of, but I don't know how they manage to do it for 5 solid days! Exhausting! 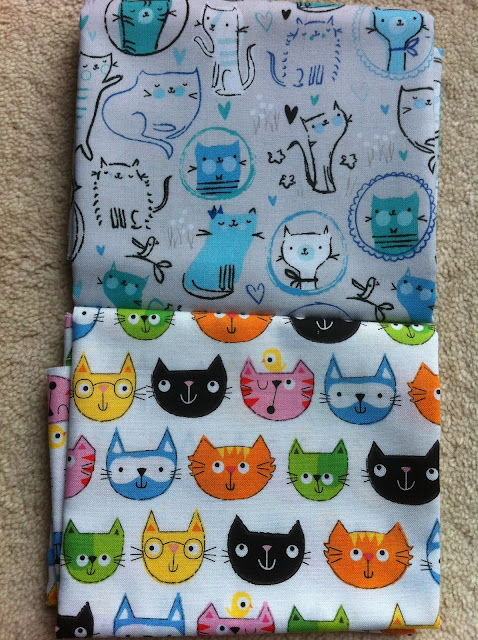 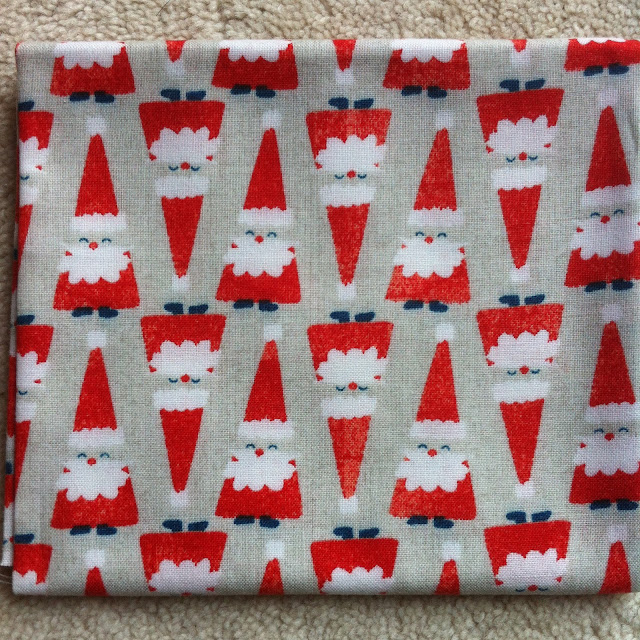 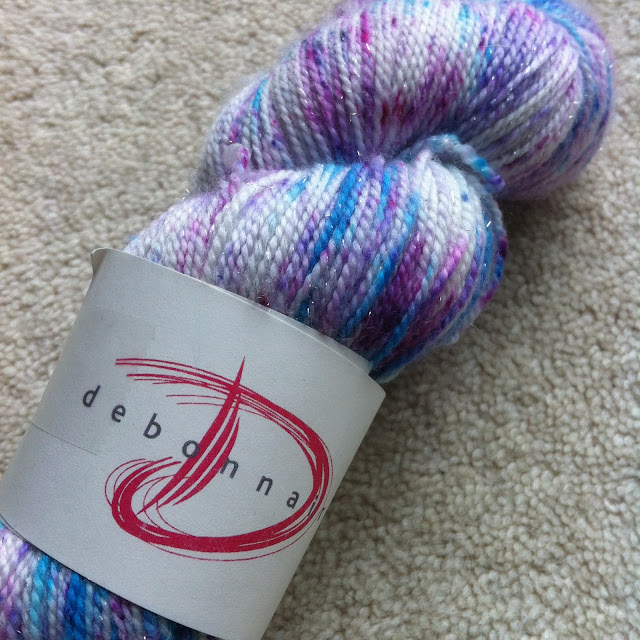 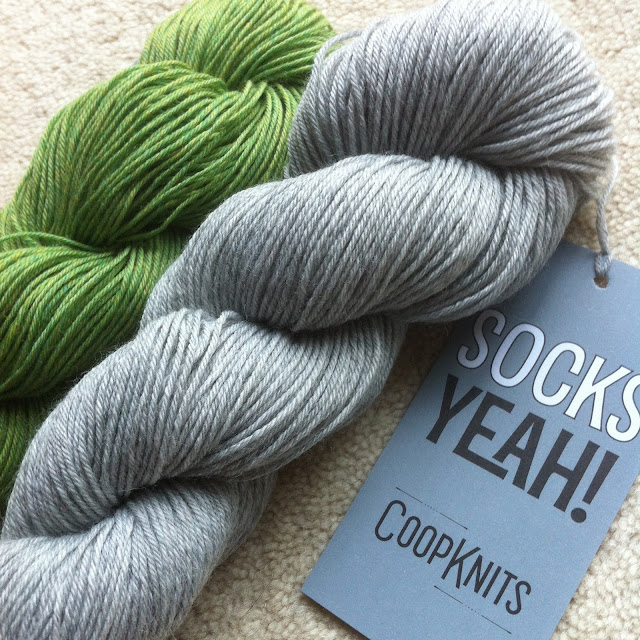 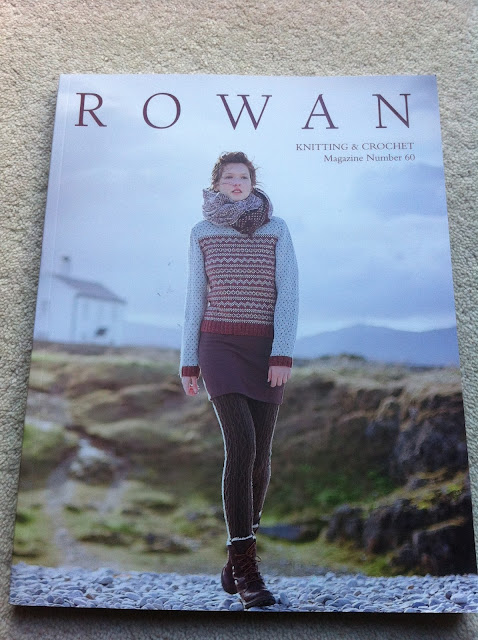 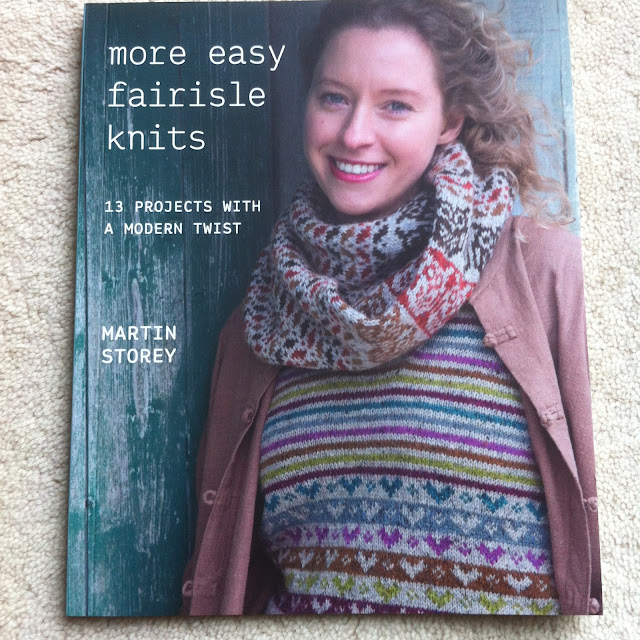 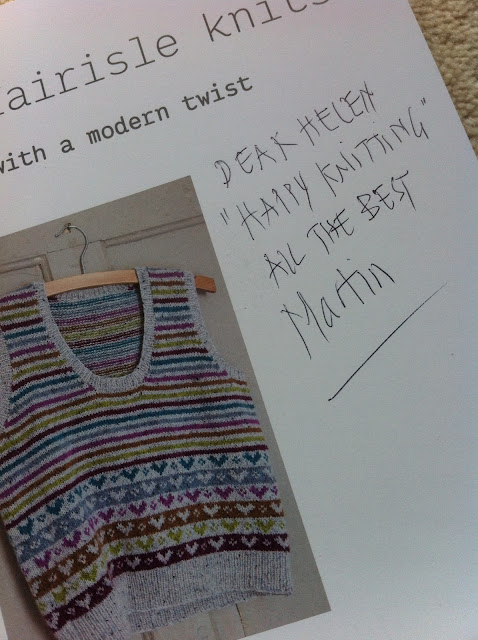 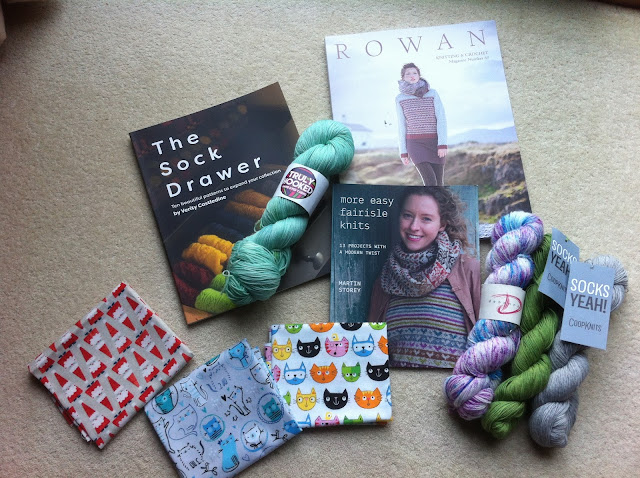 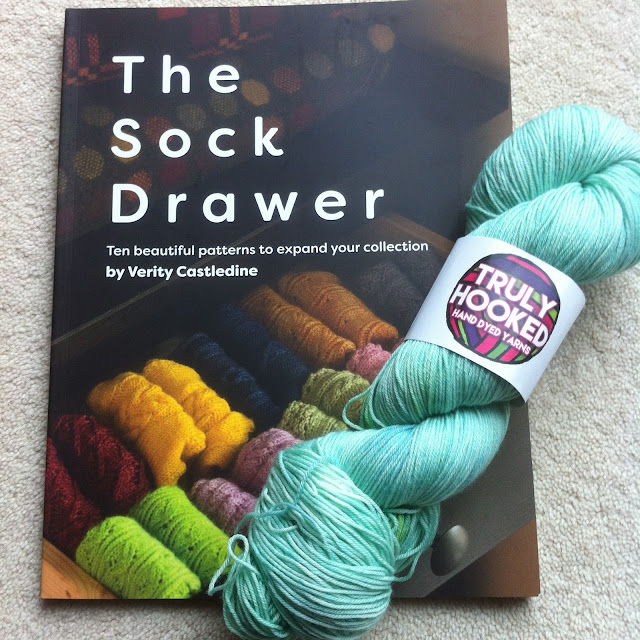 It's been a Happy Mail week here too. After dithering for a few weeks, I decided to order a book of mini patchwork projects from Love from Beth. I first came across Beth's designs at the Festival of Quilts the summer before last and I loved her style. In a recent blog post, she mentioned that people ordering her book would receive a pack of fabric to make one of the projects in the book until she ran out of packs. I was one of the lucky ones and have some rather lovely fabric (also designed by Beth) to sew a fabric dish. 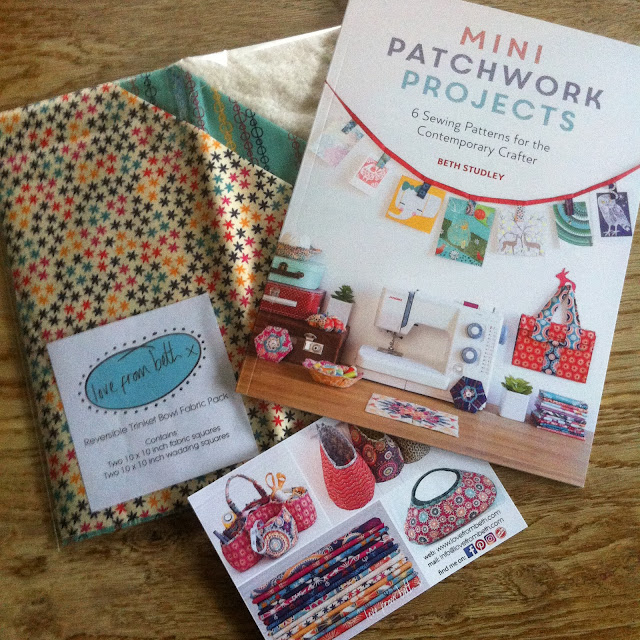 I  also received a skein of yarn from Laughing Hens - they got in touch with me recently and asked if I would like to do occasional reviews for them. Of course I said yes!! I knit some of the yarn on the trip to London yesterday and will report back later on it. But I will just say it's rather yummy! 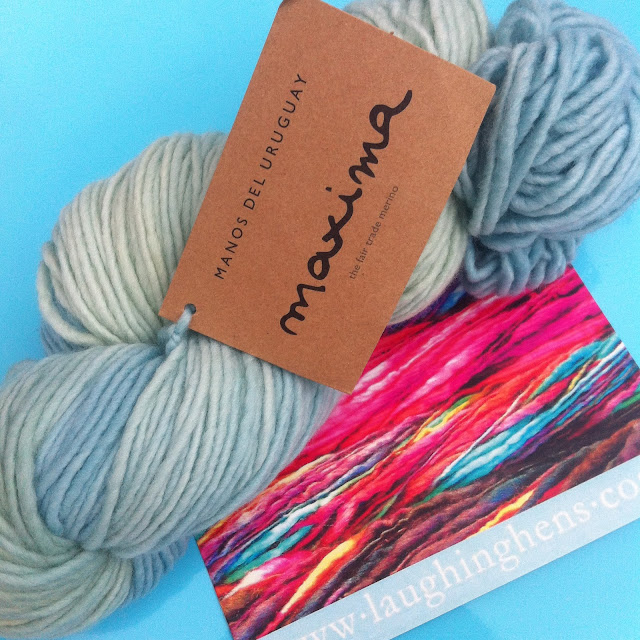 Flo has been rather clingy today. Mr JK is away for the weekend running the Yorkshire marathon, and she is a daddy's girl! I was finishing off a project for the Stylecraft Blogtour coming later this month and she pounced on a skein. There's a video of her on Instagram if you want to take a look. Every ball and skein of yarn has to pass the 'Flo Squishability' test! 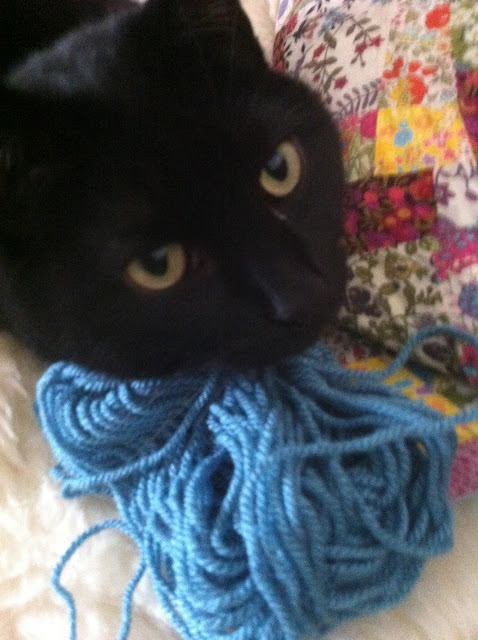 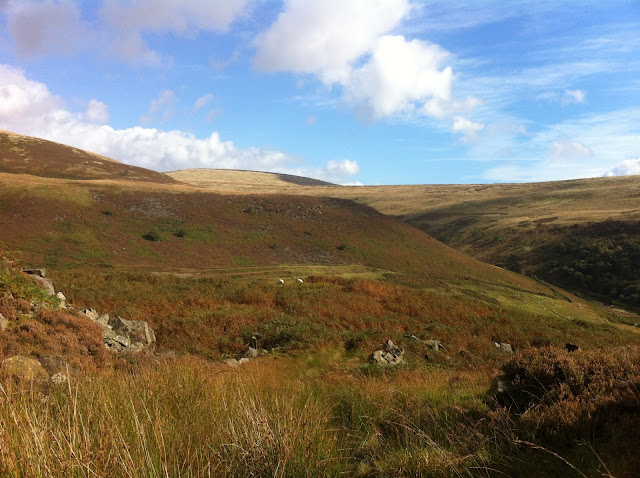 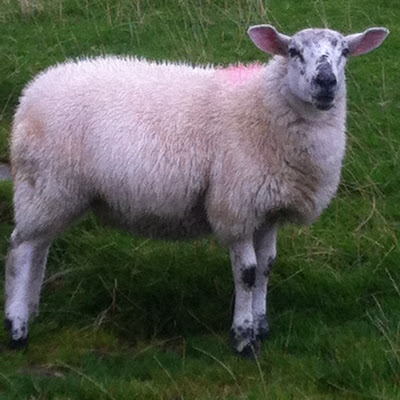 Hellooooooo! It feels like such a long time since I was here! Hard to believe it was only last weekend. I've spent the week in Derbyshire on a residential trip with my class. It was a packed week with all kinds of adventurous activities such as kayaking, rock climbing and stream scrambling and the kids had a great time. It is a beautiful part of England with some stunning scenery and plenty of sheep too! I managed to fit in a few rows of knitting each evening sat outside the dormitories, waiting for the kids to fall asleep. As soon as they were quiet, I went to bed too, so I didn't make very much progress. Still, I've had a rather lazy weekend, filled with baking, knitting and sewing as well as catching up with what's been happening online. I had a mug of tea and cake to fortify me as I ploughed through a week's worth of photos on Instagram! It's a very delicious Marmalade cake - recipe here should you wish to try and make your own. If you like a cake with tang, it's worth a bake! 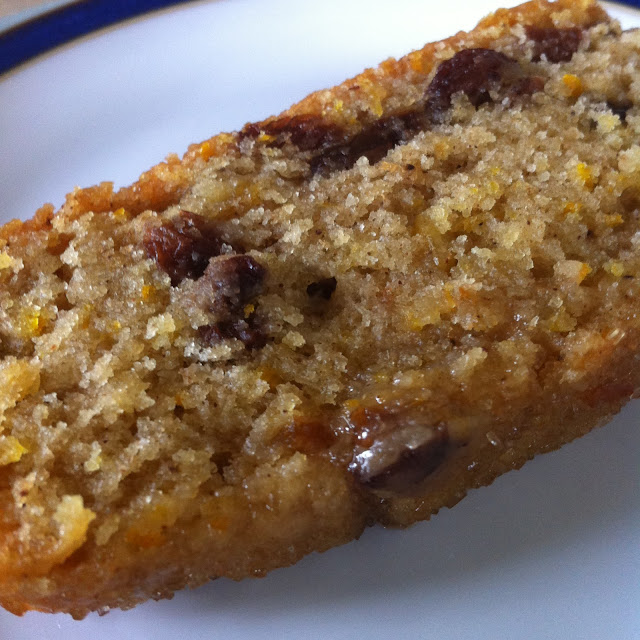 I've been working on some secret projects for the Stylecraft Blogtour which starts later this month, so can only share tiny peeks of what I have in store for you for now. One of my designs is hopefully going to combine knitting and sewing, since I have become a little addicted to it in recent months. The last photo shows the start of an i-cord edging - I could be some time with this! I love the neatness of the finished project, so it will be worth it! 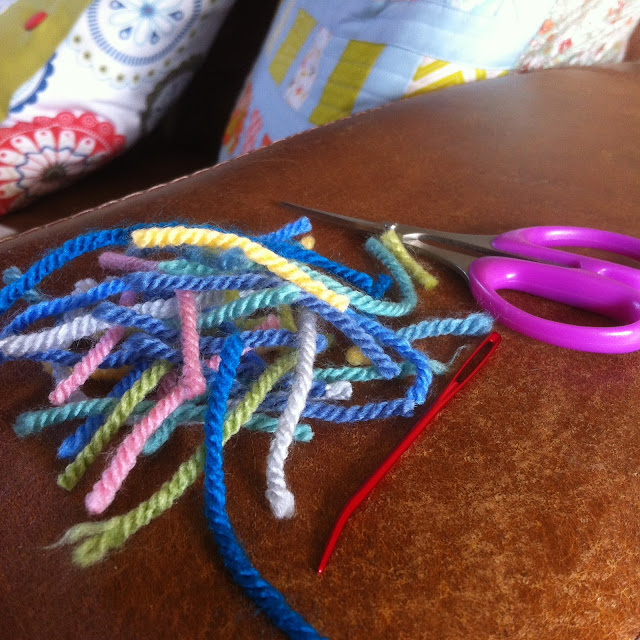 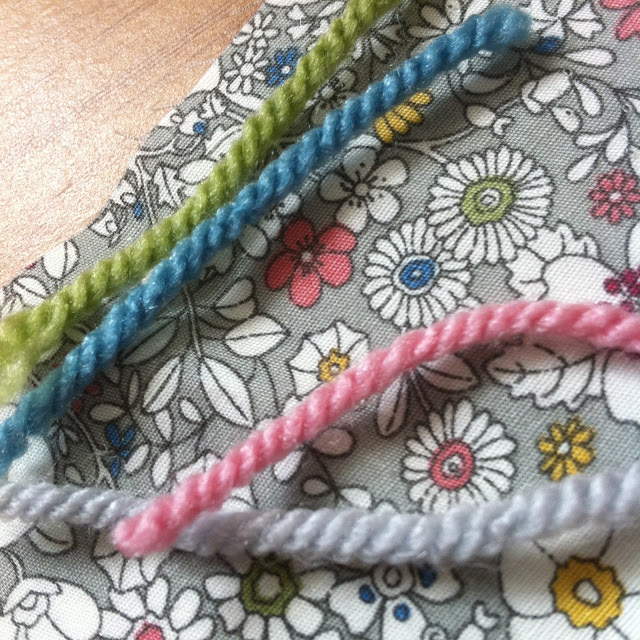 I worked on a new sock pattern while I was away - using the new Head over Heels yarn from Stylecraft. I'm using a textured stitch pattern which hopefully shows off the colour changes quite nicely. I'm ready to decrease for the toe now, so ought to have the second sock on the needles by next weekend. The kitty bag is from ThreeBagsFull. Michele does have excellent taste in fabrics and I love how the lining matches so well. 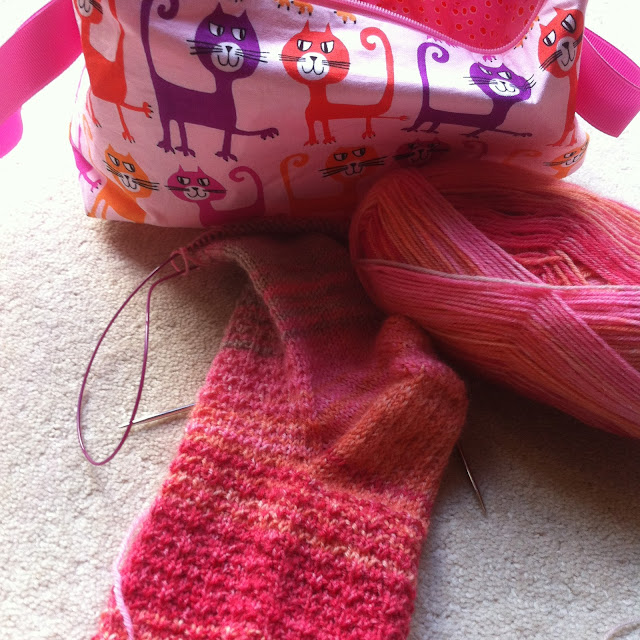 Talking of next weekend, I'm going to the Knitting and Stitching Show at Alexandra Palace on Saturday. I'll be on the Stylecraft stand at some point, so please stop by and say hello if you're there! I'm going to have a rummage through my stash before I go because UK Hand Knitting is holding a special event on their stand. They are asking visitors to take along any unwanted yarn to be donated to the charity Knit for Peace. In return you'll be entered into a draw to win lots of goodies. What a great idea. I know I have yarn in my stash that I'm unlikely to knit and it'll be going to such a worthwhile cause. If you're planning to visit Ally Pally this week, why not take along a couple of balls of yarn from your stash to make room for new purchases?! Have a great week, I'll report back on Ally Pally next Sunday. xxx