These shoes are made for running... 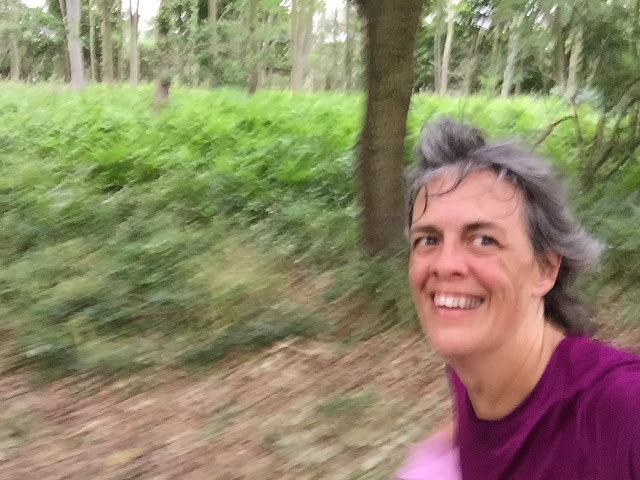 I have something to tell you. Something that I never thought I'd be telling anyone ever. Ok, here goes - I'm running a race! Me, josiekitten, lifelong couch potato and exercise-phobe! As many of you will know, Mr JK was passionate about running. He absolutely loved the buzz it gave him and was constantly challenging himself to new things. I was a bit of a disappointment on that front. Whilst I was very happy to go along to races to support him (unless camping was involved!), the thought of running anything other than a bath was quite frankly hideous! Yes, for a few seconds as the runners were crossing the finish line, the thought went through my head 'that must feel amazing', but just as quickly, it went again. Mr JK really hoped that I'd share his running love and I'd got as far as downloading the Couch to 5K podcast before he died, but I didn't even own a pair of trainers!

Soon after he died, the crazy idea of running a race in his memory starting bubbling away inside me so I made a start on week 1 of the programme. After my first efforts, I bought some proper running shoes and a sports bra! But my running didn't last long as I experienced problems with my knee. X-rays showed that I have quite bad arthritis in my left knee, so I worked hard at the gym doing lots of exercises to strengthen it and stabilise the joint. I finally went for my first run outside in April this year. Of course I didn't want anyone to know about my running, or even going to the gym. It was a precious secret, something that I was sharing only with Mr JK. I drove to local parkland where I could run incognito. I still find it hard to make myself go out and run where I live - it's silly I know but I worry about what people will think! But I have had some wonderful early morning runs and seen lots of wildlife - owls, rabbits and deer to name a few. Have a look at some of the photos I took when I stopped to catch my breath! 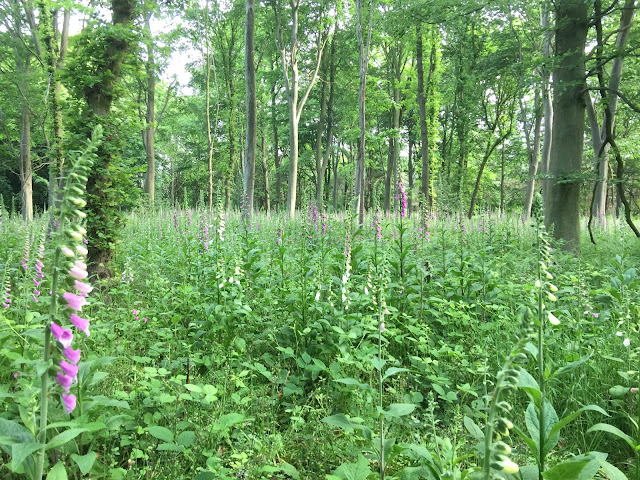 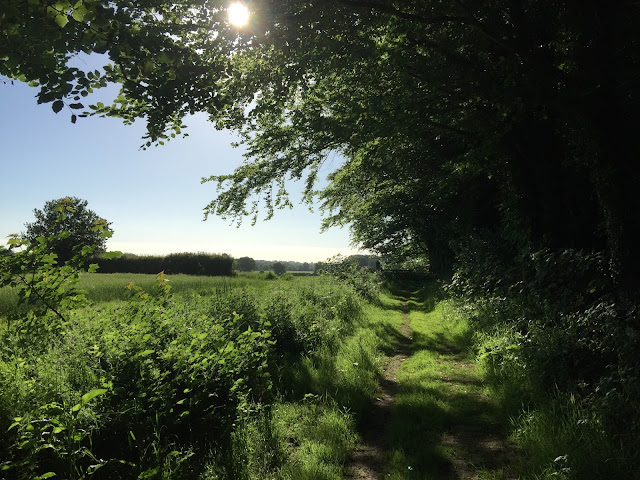 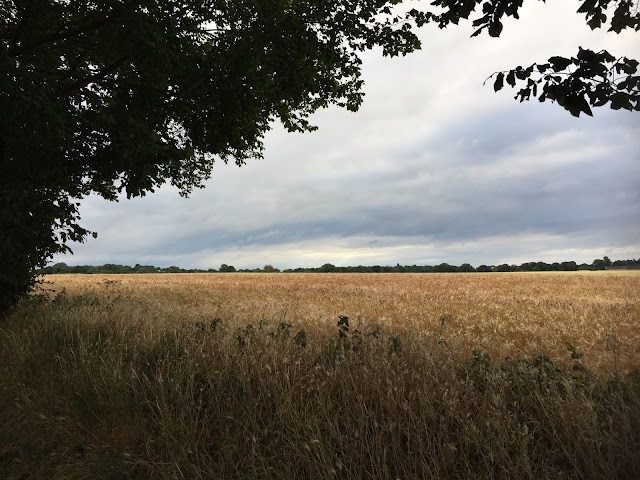 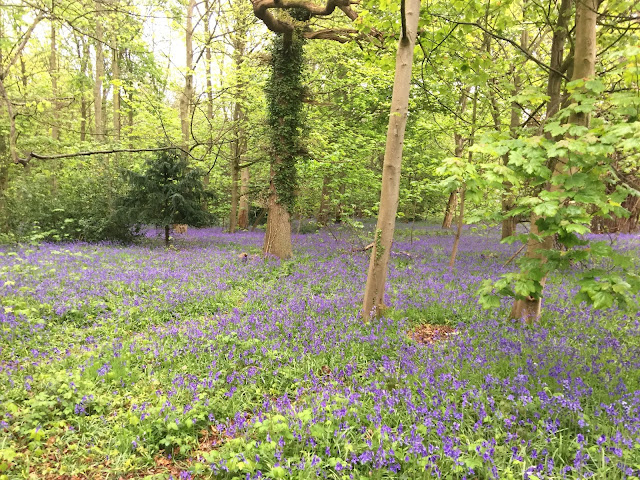 I never thought that I'd be buying a running magazine, wearing breathable technical clothes (as well as Mr JK's running tights which I'm sure is giving him a great laugh!) or worrying about starting and stopping my Garmin watch to record running data accurately! It's so not me! As one of my friends said to me on WhatsApp this week, 'OMG, who is this person and what have you done with Helen?!'

One day I retweeted something on Twitter, and was astonished a few days later to discover that I'd won entry for two into any Great Run event. I talked it over with Charlie, who I've been working with at the gym, and together we decided that the Great North Run would be a challenge! That's a half marathon - actually the world's biggest half marathon - if you didn't know! It's two weeks today and I can't quite believe that I'm going to be doing it. I'm not fast because I do a mix of running and walking to protect my knee, but I am determined to cross the finish line. I've run the distance in training so I feel reasonably confident that it's all going to be good on race day. Running has helped me to feel closer to Mr JK and has got me through some pretty dark days. I'm sure that he's going to be running alongside me and feeling proud of me too. I'm raising money for the British Heart Foundation and if you would like to donate to support me, I'd be so grateful. There is a link to my Just Giving page in the sidebar of the blog and you can also get to the page by clicking here. Thank you, thank you, thank you. I'll keep you posted on how it all goes, I promise you. xxx
Posted by josiekitten at 18:43

Wow, Helen, well done! Mr JK will be so proud of you, just for getting this far. He'll be running every step of that race with you, and will be so proud to see you cross the finishing line.
Have donated to show my support, and will be thinking of you on the day. I so much admire your strength and determination, you are one very capable lady! Carol.

Crikey - you're a dark horse! Doing the Couch to 5K is impressive enough, but a half marathon! You go girl; Mr. JK would be bursting with pride. xx

That news makes me so happy, you are amazing.

BRilliant.Mr JK would be so proud of you.

Well done you! That is so sweet that you tried running, and fantastic for you that it is bringing you joy. Don't worry about running where you live, who cares?! Anyone who matters doesn't care, and anyone who cares doesn't matter!

What a beautiful, happy photogrpah; you are so brave and strong (despite how you must still feel much of the time). Funnily enough you have already been one of the reasons that I have restarted running (I stopped after a very short, slow and breathless running career due to a knee injury nearly 10 years ago). You mentioned parkruns shortly after Mr JK died and that led me to find out about them and, a few weeks ago, I started going along to our local one. On Saturday I got down to 30 minutes and 40 seconds and am trying very hard to get a sub 30min. Your goal puts mine to shame though as I was aiming for a 10k next March!!! I wish you much good luck, energy and stamina when you do your half marathon. (I've started buying a running magazine too; it makes me feel more like a real runner :-) )

Go girl go!! Mr Jk will be with you all the way. I am in your position my husband died last year with pleural mesothelioma (absestos cancer). I also have a lung condition, pulmonary fibrosis, but i am close to going on the lung transplant list.If I am fortunate to receive one I have planned as well to train for a half marathon for charity.

All the very best,
Kathy

Gosh, what an inspirational thing to do. I am absolutely sure that Mr JK will be with you every step of the way. SmallP xx

How fantastic you are a fellow runner as well as a fellow knitter:-D

I got back to running after a few years break with C25K and roped my husband into it as well.I am running 6k x 4 times a week to keep in shape - sometimes more if the mood takes me.

Ping me an email if you would like to connect on the Garmin site (all the best runners use a garmin!)

Small P gave me your blog address so I've just popped over to say hello. I read this post with a lump in my throat. My husband is a marathon runner and last year I decided to focus properly on my running and six months later ran my first HM. I'm completely hooked now. You will absolutely love achieving the Great North, I'm sure it will be a very special and emotional experience and your husband will be so proud of you. From one runner to another I will be willing you on. CT.

Wow you are amazing. Hope it all goeswell. CN x