Ends and no beginnings!

My Attic24 Harmony blanket is finished! I cannot begin to tell you just how much pleasure it gave me to make it. The rhythmical motion of hook against yarn and the beautiful colour palette have really helped me get through the last few pretty stressful weeks. I had always loved this blanket from the very first time I saw it on Lucy's blog. But I was put off making it because it was made of squares and each round of each square was a different colour. On previous crochet projects, I haven't been very good have been absolutely awful about dealing with the ends as I've gone along, and believe me, there is nothing more tedious than having a gazillion ends to sew in once all the crochet is done and all you want to do is snuggle under said blanket. So when I started work on this one, I followed Lucy's very wise words and sewed in the ends as I went along. It actually was no trouble at all to do this and I wondered why I've found it so difficult to do so in the past. After hooking the last round of the border and sewing in those two ends, my blanket was done and ready to show off! And it is a beauty, there's no denying it. If you'd like to find out more about the pattern, you can find details on Lucy's blog here and buy a yarn pack from here if you're inspired to make one of your own. I took a couple of photos the evening it was finished but the light wasn't too great. 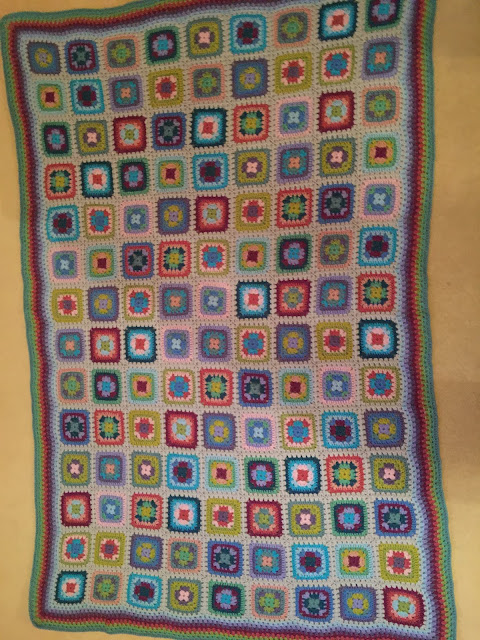 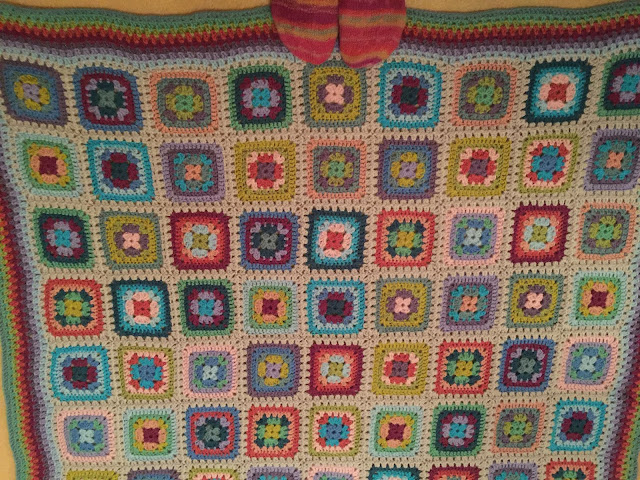 The next day I took it outside and spread it on the bench at the bottom of the garden. It was a perfect, sunny, autumnal day. The kind that brings a smile to your face. I don't even mind it being cold if it's bright. I just stood there admiring the sheer gorgeousness of the blanket. It really does live up to its name, Harmony. 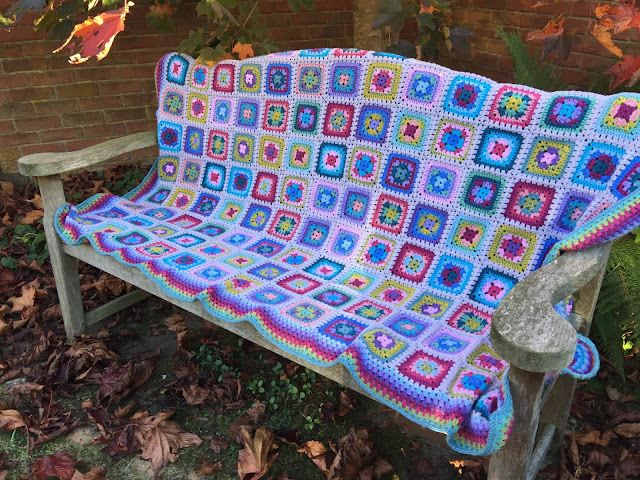 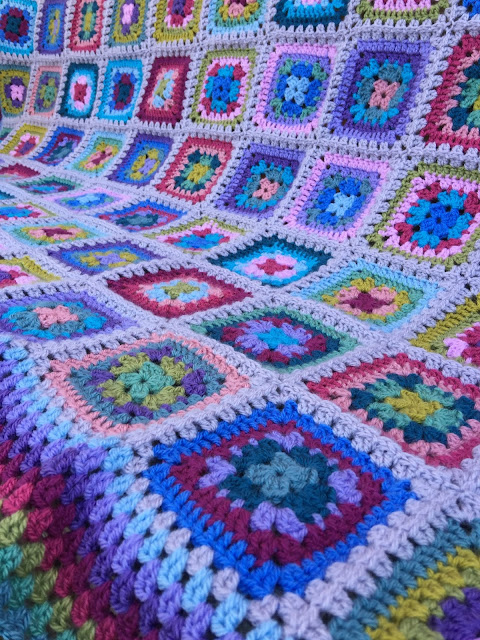 Naturally a blanket photoshoot wouldn't be complete without Flo! Despite her attempts to ignore the blanket during its making, she couldn't resist posing alongside it. 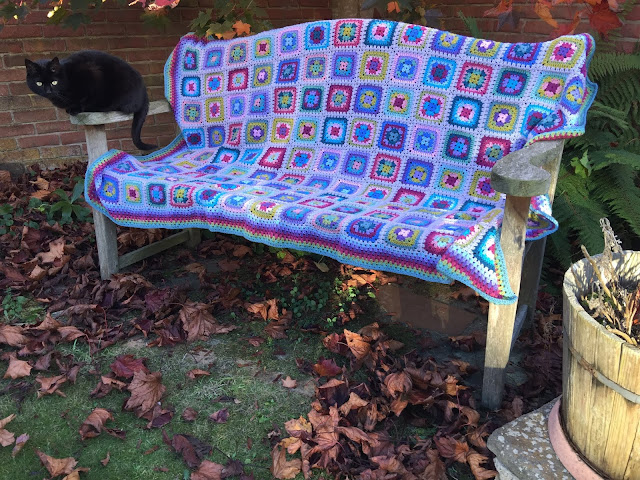 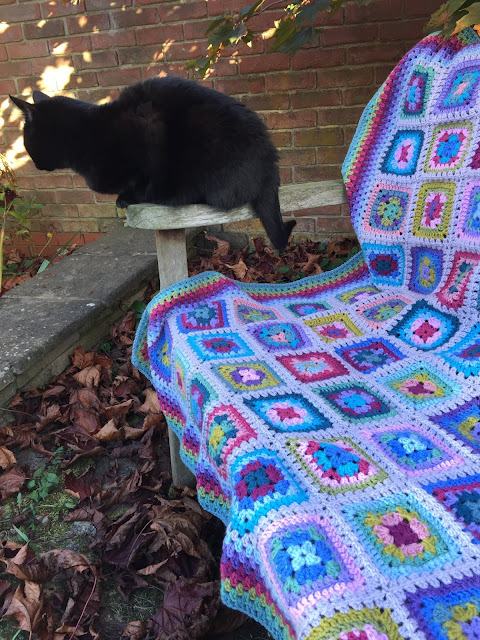 I told her not to get too attached to the blanket as it wasn't going to live at our house. While I was making it, I decided to give it to my friend Julia - she has admired it in its various stages of making. Julia has been such a good friend and has come with me to every single hospital appointment - and there have been nearly 20 since the beginning of August. That's an enormous amount of her time given up for me without any hesitation, so I wanted to thank her by giving her back some of my time too. She was delighted with the blanket and sent me this photo of it on her bed. I'm so pleased that it's going to be used and loved. 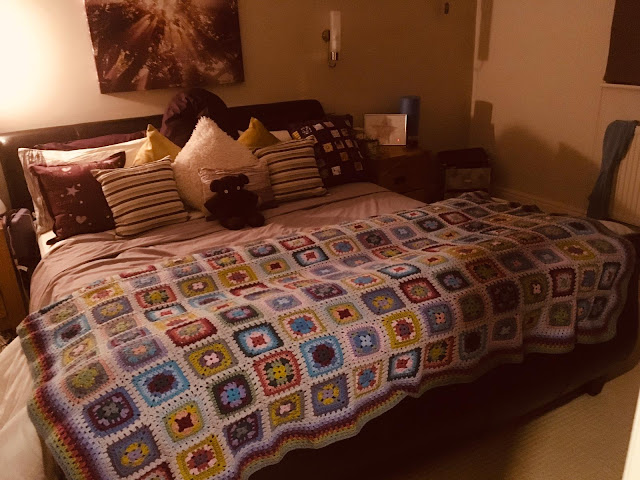 So what am I up to now? I'm itching to start some new projects but I'm being very strict with myself and have a list of WIPs, some of which have been hanging around for way too long. And two of them are crochet projects that just need the ends sewing in. One is my Midnight Companion blanket that I started soon after Mr JK died and I was unable to sleep. I actually finished the blanket about a year ago, bar the ends. I'd even considered going with the fringed effect and leaving them! But I'm going to get them woven in and my aim is to show you the finished blanket next week. As long as Flo doesn't want to spend too much time on my lap, that is! 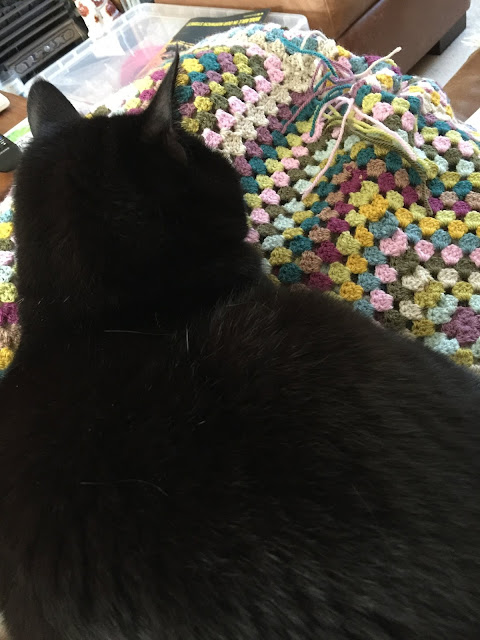 I also have my Granny square cushion made from the (ahem!) 2016 Opal sock yarn Advent calendar which also needs the ends sewing in before the cushion can be put together. Again, I tried to convince myself that it wouldn't matter if I left the ends, but I know that I'd be able to spot them poking out to taunt me! So I'm going to work on that this week too and hopefully then be able to put these two long-standing WIP's to bed. What's the oldest WIP that you have lurking? Time to confess all to me! You're amongst friends! xxx 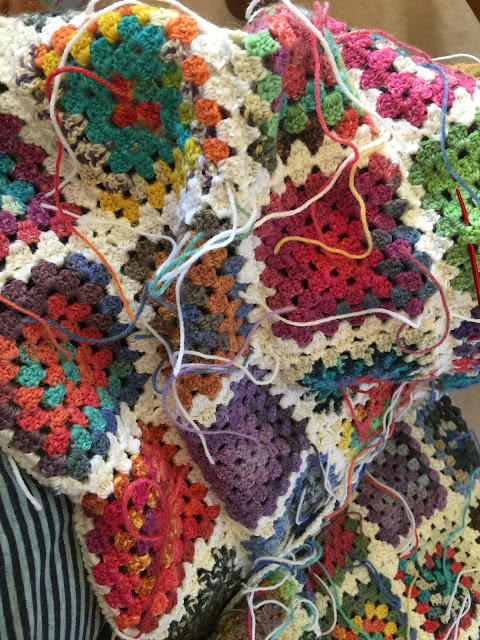 Posted by josiekitten at 17:00

I generally only knit one thing at s time and definitely have no unfinished knitty items - I know, go straight to the top of the class. However, I did start a patchwork when I retired, 10 years ago, and it isn’t finished. It’s about the size of a cushion, I might make it into a cushion one day, I’m with you on sewing in the ends, I have to make myself sew up the two on a sock before I start the second one because having four ends would be too much. I have a friend who knitted a Kaffe Fassett multi coloured jumper and left all the ends on the inside, you’d like her.

Lucky Julia - that blanket is gorgeous. I'm surprised that Flo didn't pounce and claim it! I have a bit of English paper piecing that's a couple of years old that I really must get around to finishing. Somewhere, I also have a bag of knitted squares from when I tried to knit through one of those 200 block books with a view to making a blanket. I feel that that particular WIP will be languishing for a while as I can't for the life of me remember where I put it! xx

What a beautiful blanket, the colors are absolutely gorgeous! It is a great size as well, very nicely done :) My oldest knitting WIP is a couple of years old, it is an advent calendar type project with 12 small mittens and 12 small toques (maybe you call them caps? in Canada they are called toques) that are knitted up and hang on a cord with tiny clothes pins, small treats can be tucked inside each one. It's very cute but keeps getting bumped from the queue for other projects that are usually under a gifting timeline. I'm sure I won't get it finished for this year but hopefully Christmas 2019 it will be hanging above my fireplace!

Your blanket turned out beautifully! And I'm very glad your friend likes it - good luck with weaving in all those ends!